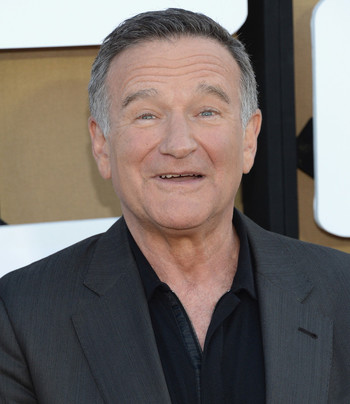 "
"You're only given a little spark of madness. You mustn't lose it."
Advertisement:

Born in Chicago, he grew up in the city's northern suburbs and the suburbs of Detroit before graduating high school in Southern California. He began his performing career studying drama at the Juilliard School in New York City. At Juilliard, he demonstrated a gift for accents/dialects and amazed everyone by showing that he could turn off his dynamo energy and fully disappear into a character. He left before graduating after his instructors, some of the leading actors of their generation, told him they had nothing more to teach him. While at Juilliard, he was roommates with Christopher Reeve, with whom he became fast friends and the two swore to each other they'd support each other through thick and thinnote it was Williams who helped Reeve find the will to live after becoming paralyzed and Williams unhesitatingly offered to cover his friend's medical expenses. Somewhat ironically, considering his reputation as a motormouth, he supported himself during his studies by busking as a mime in Central Park.

Although he was classically trained and had a knack for serious theater, Robin's preferred stage was to be found in standup comedy clubs. There he was discovered (several times) by TV producers and agents. Technically first appearing on TV in a failed revival of Rowan and Martin's Laugh-In and The Richard Pryor Show, Robin rose to fame as the zany alien star of Mork & Mindy, a role he quickly got in a way that was so distinctively him. When producer Garry Marshall asked him to take a seat for the audition interview, Williams immediately sat on his head on the chair. At that move, Marshall needed no more convincing that he found his alien.

In that series, his comedic brilliance at improvisation was so irresistible, the writers decided to bank time in the scripts for Robin to cut loose. During this time, he struggled through addictions to cocaine and alcohol, and made his first major movie, Popeye, in 1980 — which proved to be a Troubled Production and a box-office disappointment. (His first film was actually a sketch movie called Can I Do It Till I Need Glasses. His scenes were cut out after the film's first release but restored for re-release just before Popeye came out.)

After Mork and Mindy was cancelled, Robin still struggled on the big screen, through The World According to Garp, Moscow on the Hudson, The Best of Times, and the very poorly-received Club Paradise. It wasn't until Good Morning, Vietnam that people started taking this comic seriously, and he got his first Academy Award nomination for Best Actor. He was nominated again for Dead Poets Society two years later, and yet again for The Fisher King two years after that. He didn't win for any of them. He continued to churn out classic roles, like a grown-up Peter Pan in Hook, the Genie in Aladdin (which helped establish the Celebrity Voice Actor as the "star" of an animated film) and the title role in Mrs. Doubtfire. Williams was cast as the older Alan Parrish in 1995's Jumanji. In 1996, he starred in the Francis Ford Coppola dramedy Jack and starred alongside Nathan Lane in the hit comedy The Birdcage. In 1997, he finally won his rightfully-deserved Oscar for Good Will Hunting. After that, he went through a period of overly-maudlin films such as What Dreams May Come, Patch Adams, Jakob the Liar and Bicentennial Man.

When these films became critical failures (and even gave him a disturbingly sizable Hatedom), he went into another period in 2002, one no one would have expected: his dark period. Death to Smoochy, Insomnia, and One Hour Photo established that he wasn't always so cute and cuddly, and all but Smoochy got rave reviews. Although he returned to the stand-up stage that same year, he continued to make films of all sorts of genres. Dramas like House of D, comedies like RV and family films like Night at the Museum and Happy Feet prove that he could somehow still make terrible movies better and good movies amazing.

Towards the end of his life, Williams fought depression and was eventually diagnosed with Parkinson's disease in 2014. He tragically hanged himself in his Paradise Cay home on August 11 of that year. An autopsy revealed he really had diffuse Lewy body dementia

, an even nastier condition

which may have been misdiagnosed as Parkinson's, and was likely an aggravating factor in his depression.note Lewy body dementia is related to Alzheimer's. He was 63 years old.

His daughter Zelda Williams (yes, named after the video game character) is an actress and model.

Like any celebrity, Robin has been parodied or caricatured a lot in popular media: