Series / The Crazy Ones 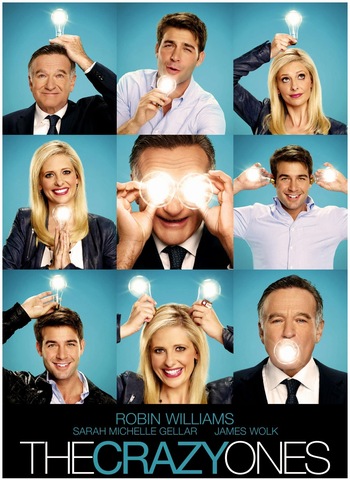 Sydney: Dad, this is not something you do to a partner. My name is on the door now.
Simon: Really? I thought that was my name twice.
Advertisement:

The Crazy Ones is a comedy which began airing in fall of 2013 on CBS. The series focuses on the Lewis, Roberts + Roberts Advertising Company, headed by Simon Roberts (Robin Williams) and his daughter Sydney (Sarah Michelle Gellar). Sydney has recently been promoted to partner, which means she not only has to contend with her buffoonish and off-the-wall father on his own terms but also the charming copywriter Zach (James Wolk), nebbish art director Andrew (Hamish Linklater), and ditzy assistant Lauren (Amanda Setton).

The series is mostly carried by Robin Doing Something Funny and Sarah responding to it, but it has its fair share of standard workplace comedy and father-daughter heartwarming moments.

The show was cancelled after one season, with the final episode airing on April 17, 2014. It was the final television role for Williams, who died four months later.