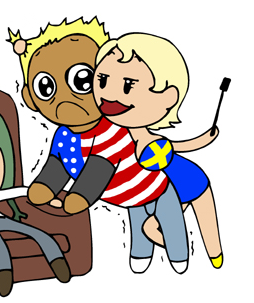 "You know America was founded by prudes. Prudes who left Europe because they hated all the kinky, steamy European sex that was going on."
— Cooper, EuroTrip
Advertisement:

In works produced outside Europe, Europeans are often depicted as more sexually free and straightforward than anything else on the planet. The sexually liberal European is typically contrasted with a more inhibited American, or with some other non-European character, who has trouble dealing with her libertine ways. Since this is usually Played for Laughs, the European character tends to be female, as having a woman act this way is considered more outrageous, and therefore more humorous. Men acting in a sexually straightforward manner is considered either normal, or at least not particularly funny.

If the kinky European is a minor character, they're usually presented as a sex object to the protagonist, often with added Fanservice. If they are given more characterization, they tend to be an Ethical Slut. This trope can overlap with Innocent Fanservice Girl, if the supposed kinkiness of the European character is explained by their culture simply not having the same sort of inhibitions that the culture they are contrasted with has.

A stereotypical example of this trope is the blonde Swedish nymphomaniac, though other European nationalities can also be used. The biggest exceptions tend to be Britain and Ireland: British people are commonly portrayed as more repressed than everyone else on the planet, while the Irish are considered too intensely Catholic for casual sex (instead tending towards having large families). However, in Asian media, sexually liberated behaviour is frequently associated with anyone from European descent, including all of the Anglosphere. note Especially because English is by far the most common European second language in Asia, Asian countries are relatively more familiar with the Anglosphere than the rest of the west, plus Hollywood cultural influence, so it is more likely for a sexy American or British character to appear in Asian media, even if they are considered stuffy by continental European standards. Sorry Ireland, one day they'll know you exist. See also Gorgeous Gaijin.

As a narrative trope, Europeans Are Kinky has been around since the 1960s. Earlier examples are rare, at least in mainstream audio-visual media, since before that decade cinema (excluding porn) and TV didn't address sexuality with the level of candour the trope requires. In the 1960s, the Swedish movies I Am Curious (Yellow) (1967) and Language of Love (1969) were among the first films with explicit sex scenes to get a wide international distribution, thus contributing to the stereotypical image of the "kinky Swede". Even earlier, the French film The Lovers (1958), which includes a short (and not particularly explicit) sex scene, was the subject of a famous American court case. A screening of this film in Ohio resulted in the theater manager being convicted for public depiction of obscene material. The manager appealed, and the Supreme Court eventually overruled the conviction, stating that the movie was not pornography, and therefore not obscene.

Even though the aforementioned movies helped establish the image of the sexually straightforward European in the US, they are not examples of this trope as such. Europeans Are Kinky typically appears in works produced outside Europe itself, as a vital part of the trope is that the European character is seen from an outside perspective as an exotic Other

However, this trope is sometimes used in some European works too, to illustrate perceived cultural differences within the continent. It can appear in British and Irish works, since the British rarely tend to think of themselves as Europeans, and usually use the term "Europe" to mean "continental Europe", and the Irish still have the whole "Catholic guilt" thing going on. Also, while American works generally lump Russia in with the rest of Europe in regards to this trope, Russian authors usually distance themselves from it. Instead, kinkiness in Russian culture is often associated with the The European Union. And in works from Catholic European countries (such as France or Italy), the same trope exists about the women from Northern and Protestant Europe (Scandinavia, Germany, the Netherlands), who are described as more promiscuous than the local ones.

This trope can sometimes be Truth in Television, as in many European countries nudity and sexuality are indeed considered less taboo than in the United States, making them look kinkier in the eyes of Americans. The "kinkiness" of Europeans also has some scientific proof: in a study published in 2005

, citizens of 48 different countries across the world were asked about their attitudes towards multiple sex partners and casual sex. When these countries were put in order based of how promiscuous they are, 13 of the top 20 countries were in Europe, and the United States placed 22nd. The European countries in the top 20 were mostly former Eastern Bloc states and Protestant countries, whereas most Catholic countries in Europe, such as Italy, Spain, and Portugal, actually placed lower than the US. A more truthful way of formulating this trope would therefore be "non-Catholic Europeans are kinkier than most other nationalites", but the ancient Latin Lover trope means that people from Catholic countries are often characterised as kinky too.

For subtropes tropes about specific parts of Europe (or Europeanised continents), see:

Jackula makes a joke based on the trope.

Jackula makes a joke based on the trope.