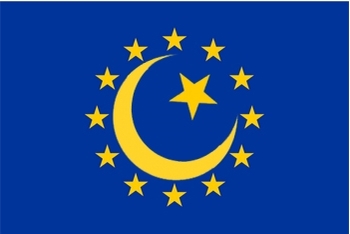 (a portmanteau of "Europe" and "Arabia") is the name given to a hypothetical future scenario in which, thanks to a supposed declining birth rate among white Europeans and capitulation from politicians trying to appeal to immigrant communities, Europe becomes ruled by Muslims, who reshape the continent to resemble the Middle East (specifically either Saudi Arabia or Afghanistan), or at least the Theme Park Version of it. In most scenarios, this new state links up with a Middle Eastern Coalition to form a new Euro-Asian caliphate.

While the word itself was first used as a name for the newsletter of a Euro-Arab friendship committee in the 1970s, the concept underlying its modern usage was coined by far-right essayist Bat Ye'or in her 2005 book Eurabia: The Euro-Arab Axis, which claimed that there was a conspiracy underway between France and the Arab world to allow Europe to become "Islamicized" as part of a plan to increase its power against the United States and Israel. Although Ye'or's theories have been derided by a lot of academics, and indeed a lot of the Europeans who fear this trope aren't exactly fond of Jews themselves, it has not stopped them from inspiring a number of works imagining the Islamic takeover of Europe.

Bear in mind that a lot of the mindset on this trope involves an Arab equals Muslim view, which ignores non-Muslim Arabs or non-Arab Muslims. Indeed, the only Islamic countries in Europe, located in the Balkans, aren't even Arab or Semitic and blend Islamic culture with their local European one. Or to put it in the terms of this very wiki, European Muslim nations are far more likely to resemble Ruritania than Qurac.

As arguments over the actual plausibility of this are often prone to Flame Bait, No Real Life Examples, Please!.