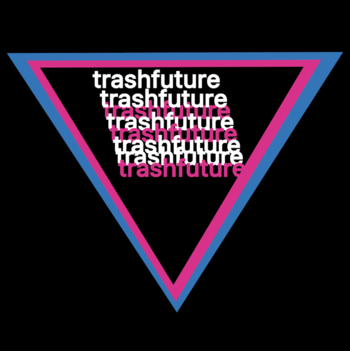 A podcast about business success and making yourself smarter with the continued psychic trauma of capitalism.
Advertisement:

What if we made the Soviet Union, but shit and expensive?

What if a Swedish man was Italian?

TF takes aim at the idea that technology will lead a utopian future, usually by pointing out overhyped, overvalued Silicon Valley startups that are based on worker exploitation, financial black magic, spying on their userbase, or all of the above.

Besides mocking institutions of the internet (Amazon, Netflix, Spotify) and obscure, pointless and exploitative startups, the show also provides insight into the conditions that have created the dystopia of the modern world.

Beginning in 2017, the show has since spawned a rich and sprawling universe of in-jokes, associated twitch streams, merchandise and Dutch synthpop.

The Nate Bethea extended universe also includes, by way of shared hosts, the podcast Well There's Your Problem, Hell of a Way to Die, Lions Led By Donkeys, Kill James Bond!, and many more.