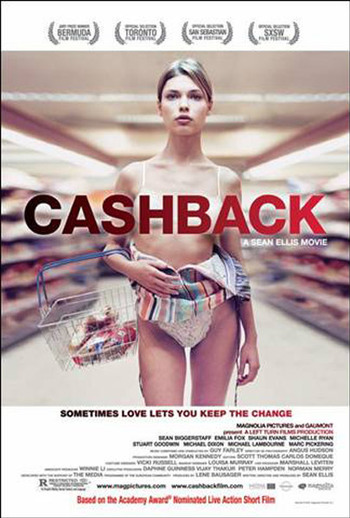 Cashback is a 2004 short film remade into a 2006 feature film, written and directed by Sean Ellis.

Ben (Sean Biggerstaff, Oliver Wood from the Harry Potter films) is a wage slave working the night shift at Sainsbury's, a 24-hour grocery store, earning money to put himself through art school. Among his co-workers are the lovely Sharon (Emilia Fox), goofy cut-ups Matt and Barry, and their irritating, overbearing boss Alan.

The workers at the supermarket find different ways to pass the time. Sharon avoids looking at the clock at all costs, even putting a piece of tape over her watch. Matt and Barry goof off all the time, doing things like having scooter races around the aisles. Ben eventually discovers that he has the ability to manipulate time. He can speed it up, but more importantly, he can freeze it. Ben the aspiring artist then starts undressing the beautiful women he occasionally sees in Sainsbury's and drawing them.

None other than Rick Astley of Rickrolling infamy composed the music for the 2004 short.