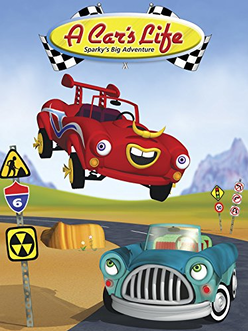 A Car's Life: Sparky's Big Adventure is an All-CGI Cartoon by Spark Plug Entertainment. It's the story of Sparky, a young car who's at the "rebellious" stage of his life. From speeding to deliberately driving over potholes and using them to launch himself in the air to getting "tricked out", his antics have his father Fender at his wit's end. Diesel, a female (though she certainly doesn't look like it) World War II-era Jeep, is a bad influence on Sparky, encouraging him to trick himself out and sneak out to the movies at night, despite being grounded. But it turns out Diesel has a sinister plot at hand...