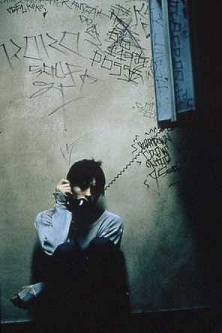 Sometimes your inner demons are all the conflict you need…
"It's not an evil plan? I don't really know what to do when it isn't an evil plan."
— The Twelfth Doctor, Doctor Who, "Twice Upon a Time"
Advertisement:

The Big Bad is supposed to help drive the plot, right? They provide the biggest obstacle for the hero to overcome. They give the audience (as well as Moral Guardians) something to channel their hate towards with terribly evil actions such as genocide, commiting crimes for immortality, kidnapping (or even worse), world-conquering, and kicking of puppies, even they can scare the audience (and children) by being the horrid monster they are through screentime. Usually, this is the case... except, of course, when they don't happen to be present at all.

Since all fiction essentially narrows down to conflict between two or more opposing forces, it is typical to represent these forces in the story's Main Characters, with the story's focus character called The Protagonist —usually (but not always) being the "good guy" (from the perspective of the work, at least)—and another in opposition to the protagonist called The Antagonist, who is usually (but not always) the "bad guy" (again, from the perspective of the work).

Some stories, however, are cut from a different thread. Rather than representing the conflict as the "good guy" against the "bad guy", the central conflict is caused by other forces and does not feature characters in direct opposition to each other. Instead, the forces at work are more intangible and not bound to a set of characters.

This doesn't mean that there is no conflict or tension—otherwise there wouldn't be a story. It simply means that the central conflict of the work has no characters who are a defined source of friction. This could mean that the conflict comes from an internal struggle, such as with addiction, or it could arise from tensions that must be resolved between the well-intentioned main characters. It could also be that the conflict arises from some sort of natural/scientific disaster, or from simply trying to survive in a hostile environment. As long as there are no "bad guys", this trope applies. If villainous characters do appear in this kind of story at all, they will be a case of Villain of Another Story and/or Greater-Scope Villain; they will not hurt, in any way, any of the story's main characters, even if they do horrible things to other unseen people.

It's possible that one of the characters will be the Hate Sink: not actually a Big Bad, but someone who makes the characters' lives more difficult to give the audience an outlet for the bad-guy hating. For example, if Bob is seriously addicted to heroin and the work focuses around his battling of his addiction, then a drug dealer that constantly supplies Bob would not count as the antagonist, even though the dealer is certainly not nice, unless there is conflict generated between Bob and the dealer. In the case where it is not, the work would have No Antagonist. Therefore villains are technically allowed, but they can only cause harm indirectly.

In other words, if the central conflict is Bob vs his own drug addiction, it is this trope, but if it is Bob vs the drug dealer, then it is not.

The trope does, however, require an actual conflict taking place within the story—works with no real conflict, such as sandbox games, would not apply. Most Slice of Life works have No Antagonist, due to the conflict being life itself, but that doesn't apply to all such series, where the antagonist can easily be someone damaging the life of the protagonist (for instance, the local school bully). This trope is also common in Lit Fic, where it is usually broken down into the categories "character vs nature", or "character vs themselves".

Not to be confused with Imaginary Enemy, where there is also no antagonist at all, but the protagonist thinks there is. Contrast Plot-Irrelevant Villain, where there is a villainous antagonist but is of little to no importance in the big game. If the story has neither an antagonist nor a conflict, the it most likely takes place in a Sugar Bowl.

Important: "No Antagonist" means Exactly What It Says on the Tin. If one or more sentient beings get in the way of the protagonists/main characters, however well-intentioned they are and however justified their actions, it is not an example.