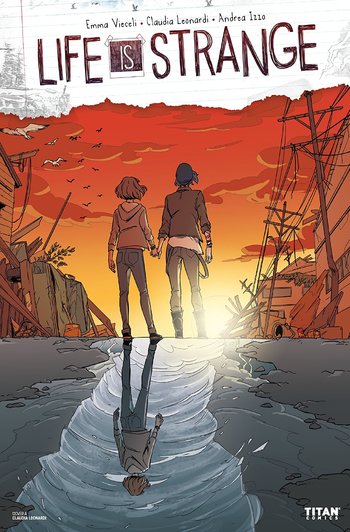 Life Is Strange is a comic series which takes its cues from the "Sacrifice Arcadia Bay" ending of Life Is Strange, essentially acting as a Sequel in Another Medium for that ending (albeit in a What If? one not to be taken as definitively canon, as stated in the foreword). The series is written by Emma Vieceli with artwork by Claudia Leonardi and colors by Andrea Izzo. It is published by Titan Comics.
Advertisement:

One year after the end of the first game, where Arcadia Bay was destroyed, Max and Chloe have moved to Seattle and are living normal lives. However, things start to go wrong after Max sees a television report about Arcadia Bay, causing her to lose control of her powers. Chloe decides to take Max back to Arcadia Bay in the hopes of solving this mystery.

The comic is released roughly once a month, every four issues comprising one story arc. The first arc, Dust, began on November 14, 2018. The second arc, Waves, began on May 28, 2019. The third arc, Strings, began on October 15, 2019. The series ended with issue twelve, but was directly continued in a Sequel Series titled Life is Strange: Partners in Time, which started on October 14, 2020. Coming Home and Settling Dust then closed the series.