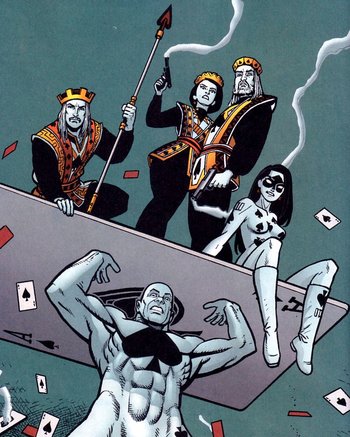 A villain carrying a card carrying villains.
"I know that the spades are the swords of the soldier
I know that the clubs are weapons of war
I know the diamonds mean money for this art
But that’s not the shape of my heart."
— Sting, "Shape of My Heart"
Advertisement:

Playing cards have a wide and varied use in fiction. If they show up, they're to evoke an air of luck, gambling, and trickery.

The standard international deck (also known as the French deck

), is the most widely-used in fiction as it is in card games. It consists of four suits — clubs (♣), diamonds (♦), hearts (♥) and spades (♠) and 13 cards of each suit, plus two jokers. Respectively, the suits traditionally represent the peasantry, merchant class, clergy, and nobility. The suits also allude to Esoteric Motifs. When it comes to color-coding, hearts and diamonds are red while spades and clubs are black. If the four suits are used in a work, more often than not they'll be to differentiate factions or characters. The suit of spades in particular is associated with death, while the suit of hearts has the usual associations of Heart Symbol when it's not an Alice Allusion.

The components of each deck, and the motifs associated with them, often represent the hierarchy within the card-themed organization in question. Note that the rankings of the cards vary between games.

Aside from the standard 52-card deck, other common decks include:

Compare Tarot Motifs and Alice Allusion. The Gambler will often have this as his scheme, as will the Death Dealer. Supertrope to Dead Man's Hand, which is a specific group of cards (two black eights and two black aces) that symbolizes death; Ace of Spades is another card/subtrope that symbolizes death specifically. Locations where playing cards are often used, such as The Casino, may make use of this as well. See also Poker.