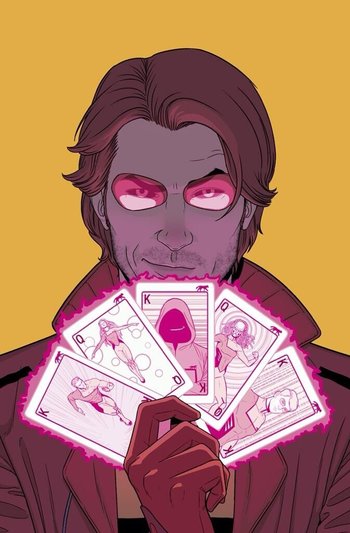 Gambit is a Marvel Comics character created by Chris Claremont and Jim Lee, first officially appearing in Uncanny X-Men #266 (August, 1990) due to the comic of his second appearance being released weeks earlier.

Not too long after his birth in New Orleans, Louisiana, Remy LeBeau was kidnapped from the hospital by the LeBeau Clan Thieves' Guild. During this time he was both sought after and feared because of his unusual black-on-red eyes. In part to protect him from a child trafficker, Jean-Luc LeBeau, the leader of the Thieves' Guild, secretly sent Remy to be part of a gang of young pickpockets before adopting him as a Guild member and his son.

As a teen, he honed his thievery skills, learned acrobatics, Savate (a French martial art) and Bojutsu (bo staff fighting) and learned he had a mutant power: the ability to force objects to explode by "charging" them, converting their potential energy into kinetic energy. The bigger the item the longer it took to charge, so he preferred to use smaller items like his Weapon of Choice, a deck of playing cards. Around this time he also got mixed up with Mr. Sinister during a mission.

To placate and attempt peace between the Thieves' Guild and their rivals the Assassins' Guild, Remy married Bella Donna, his first love and the granddaughter of the Assassins' leader. After the wedding, he was challenged by her brother Julien to a duel. Remy killed Julian, leaving Jean-Luc no choice but to exile him. Striking out on his own as a thief for hire, his powers grew beyond his control. Mr. Sinister fixed the problem, but at a cost. Gambit formed the Marauders and led them into the New York tunnels on Sinister's order. The Marauders were responsible for the Morlock Massacre, killing many of the mutants in the group, with Gambit unable to stop it. He was only able to save one child, who later became Marrow.

After that he traveled the world, saving a thieving de-aged Storm with Laser-Guided Amnesia from the Shadow King. Storm got her age and memories back and became responsible for Gambit joining the X-Men. Despite helping the X-Men save the day many times and forming a long-running relationship with Rogue, he remained a mysterious figure in the group, with Wolverine never completely trusting him. Eventually, his secret involvement with Mr. Sinister and the Marauders was outed by Magneto, and once the truth was revealed through a kiss from Rogue, the X-Men abandoned him in Antarctica, effectively kicking him off the team.

Surviving the ordeal with the help of an energy-based mutant named Mary Purcell, Gambit would rejoin and leave the X-Men several times after. At one point, both Gambit and Rogue lost their powers, letting them finally touch and explore their relationship. Despite this, Gambit went through several misfortunes including being blinded, being forced to be one of Apocalypse's horsemen, and being defeated in battle by Captain America. He currently serves on the X-Men. His and Rogue's relationship remained rocky as Rogue still had trust issues and, of course, had her powers to worry about, resulting in both seeing Emma Frost for therapy. Mystique attempting to seduce Gambit to prove he wasn't good enough for Rogue in the 2005 "Bizarre Love Triangle" story certainly didn't help matters.

As of the end of James Asmus' Gambit solo series, Gambit is now King of the all the Thieves Guilds. In 2013, he left the X-Men to join the All-New X-Factor for a time. As of 2018, he's now married to Rogue, having both Kitty and Piotr's blessing, since Kitty backed out of marrying Piotr.

In other media, Gambit became popular because of his inclusion in the The '90s' X-Men animated series, two years after his debut in the comics. He has been played by Taylor Kitsch in X-Men Origins: Wolverine. A solo movie was in Development Hell for a long time, and appears to have been definitely abandoned following the buyout of 20th Century Fox by Disney.

No relation to anything in the Gambit Index.