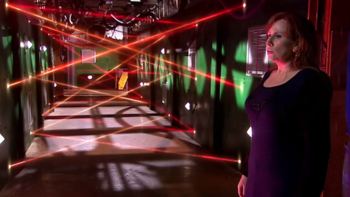 Limbo lower now! How low can you go?
"Your intruder detection system is tripped by laser beams that can be seen by the naked eye and evaded by a sensual contortionist in a skintight leotard."
— Annika-709, Plan 7 of 9 from Outer Space
Advertisement:

Whenever there's a security system in place, there's always a highly visible laser sensor grid with man-sized holes in it. The infiltrator must then use cunning acrobatics or clever trickery to navigate around the lasers to reach the target on the other side. Or, if he's MacGyver, he can rig up a cunning system of mirrors to deflect the lasers around himself.

Often, the grid can be disabled briefly without triggering the alarm, usually just long enough for the intrepid heroes to sprint the length of the hall/gallery/vault in question. Unless the plot calls for them to be caught, in which case the grid will re-activate an instant too soon. Sometimes the beams are invisible to the naked eye, requiring some Applied Phlebotinum to make them visible; this may take the form of an aerosol spray or high-tech goggles. Or just cigar smoke. Many times, to spice things up, additional devices like temperature sensors, seismic detectors, or metal detectors are added to the mix.

Most times the lasers in question will be purely sensory in nature, but occasionally they are actually dangerous in and of themselves, whether through being actually harmful or deadly to touch, or through being a tripwire that sets off a bomb or something else nasty.

Invariably, the grid will not cover the target itself, leaving a comfortable alcove for the protagonist to work in, once the system has been traversed.

In reality, low-power lasers can't be seen from the side, even with Cool Shades; they don't energize the air enough with photons to cause it to glow, and any laser that would give off a glow would be harmful or even deadly to touch. The aerosol trick does work on visible-frequency lasers, but if it scatters too much energy the alarm will still go off. Diverting a laser sensor with mirrors works in principle. In practice, however, it would be impossible to position the mirrors with enough precision to pull it off, or to find mirrors sufficiently flawless that they could be moved into place without their edges breaking the beam.

Furthermore, real security systems don't even use lasers. A much more reliable and accurate method for detecting intruders is a standard thermal motion detector or sonar-driven door sensor. Also, non-coherent infrared beam detectors can be used, like the kind of system in your TV remote or under your garage door, for much less money.

This is just the tip of the iceberg on hazardous hallways. For more, see Death Course.

In one section of the Mermalair, you must jump and duck under lasers in a hallway to reach one of the computers.

In one section of the Mermalair, you must jump and duck under lasers in a hallway to reach one of the computers.