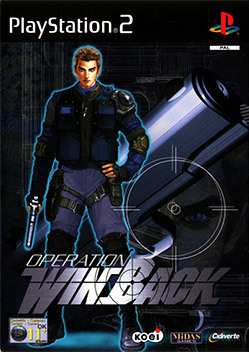 The game's European boxart for the PS2 rerelease.
Advertisement:

Winback: Covert Operations (known as Operation: Winback in Australia and Europe) is a cover-based Third-Person Shooter developed by Koei's Omega Force studio. Koei initially released it for the Nintendo 64 in Japan and North America in 1999, with an Updated Re-release for the PlayStation 2 (JP in 2000, NA in 2001); as for the European releases, Virgin Interactive handled the N64 version in 2000 and Midas Games handled the PS2 version in 2001. It later became one of the first offerings for the Nintendo Switch Nintendo 64 application in 2021. It could be considered an N64 analogue to Metal Gear Solid, and despite its obscurity it is effectively the Trope Codifier for many modern third-person shooter mechanics, particularly its cover system (which influenced that of KillSwitch, which in turn was cited as an inspiration for the much more famous and widely-copied one in Gears of War) and the use of Laser Sights for aiming (which was later popularized by Resident Evil 4).

The plot concerns the hijacking of a Kill Sat called the GULF System by a terrorist group calling themselves the "Crying Lions", demanding the US government to admit to their involvement in Sarcozia's civil war, pull out of Sarcozia entirely, and leave it alone; the player takes the role of Jean-Luc Cougar, a member of the Special Covert Action Team, as they move in to take back the complex housing the GULF System's controls before the terrorists can fire the weapon again.

An In Name Only sequel, Winback 2: Project Poseidon, was developed by Cavia and published by Koei for the PS2 and Xbox in 2006. Besides the cover system, no other elements of this game reappear.