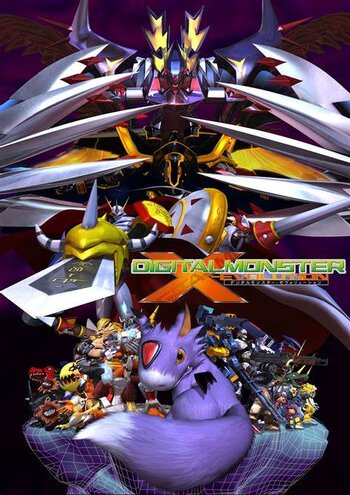 Digital Monster X-Evolution, or Digimon X-Evolution, is a stand alone film, completely unrelated to any Digimon anime, instead being loosely inspired by the Digimon Chronicle storyline. It is notable for being the first Digimon anything without any humans (the later Digimon World 4 also didn't have any humans, and it used sequences from this movie for its intro).

This movie further differs from the rest of Digimon in that it was done completely in CGI and has never been dubbed into English, possibly relating to either how it was produced at a point when the franchise was in limbo in the western world, or for its heightened level of violence. A fandub is currently being developed, but it is still very much a work in progress, with only three parts completed and uploaded onto YouTube.

The Digital World has become overpopulated and Yggdrasil, the super computer in charge of overseeing the Digital World, has essentially run out of bandwidth. He thus takes his Royal Knights and a select few of the Digimon to a new, more easily processable Digital World, and then unleashes the X-virus to destroy all life on the original Digital World. However, several Digimon that were left behind develop the X-Antibody, an immunity against the virus. This antibody not only makes them immune to the virus, but also changed the Digimon who possessed it into more powerful forms, becoming X-Antibody Digimon.

After the virus runs its course, the X-Antibody Digimon manage to find their way to the new Digital World, kicking off a racial divide between them and the original Digimon chosen by Yggdrasil, who soon orders his Royal Knights to destroy them. The movie then focuses around Omegamon, Dukemon and Magnamon, three of the thirteen Royal Knights, as they try and come to terms with the orders given to them by Yggdrasil.

As these events occur, the plot follows a young X-Antibody Digimon named DORUmon as he wanders the new Digital World, stumbling into conflicts between the X-Antibody resistance and the Royal Knights. In doing so, he comes to care for and protect a young Tokomon, and also embark on a quest to discover his true heritage.