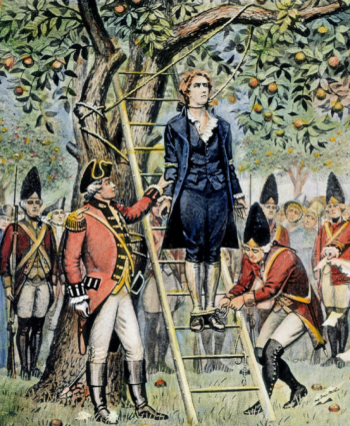 "I only regret that I have but one life to give for my country."
"There is nothing proper about what you are doing, soldier, but do try to kill me properly."
— Last words of Cicero (attributed)
Advertisement:

Alice has gotten in over her head. She's made mistakes, powerful enemies, or otherwise bitten off more than she can chew, and they want their pound of flesh. Running will only make things worse for her and her loved ones, so faced with the alternatives... she chooses to face death with dignity. She turns herself in, doesn't put up a fight, and in so doing takes responsibility for her actions and gains a measure of control in the only choice she had left.

This is a sad, meaningful fate reserved for only the most tragic of characters, for whom even Redemption Equals Death is out of reach. The best they can hope for is to give their end some order or meaning. Rescue is not impossible, in fact the mere act of facing the music may be a cause for Redemption Earns Life and a chance to become The Atoner, but it's a slim chance.

Another variant of this trope of a more messianic bent is when a character is offered a Sadistic Choice to save the hostage and MacGuffin if she trades her life for it. This is a Heroic Sacrifice with extensive premeditation, beyond merely being a Martyr Without a Cause to one with a very good one.

Of course villains who aren't Lawful Evil won't hold their end of the bargain, and the prospective martyr is usually savvy enough to tell this or is stopped. Expect the martyr to intone My Death Is Just the Beginning in either case.

Compare Better to Die than Be Killed where you shoot yourself rather than be executed. In this trope, you choose execution. Say Your Prayers may also have some elements of this, (depending on the case) as characters may give up on taking any action and just say a final prayer while letting the inevitable happen. See also Villain's Dying Grace for a specific villainous version.

Contrast Get It Over With, which also faces death with open eyes, Defiant to the End which a captive shows no respect to their captors and executioners toward the end, Villainous Breakdown where they'll completely lose their cool before possibly dying, and Hesitant Sacrifice when a heroic character breaks down in the face of their own impending death. An Undignified Death is the opposite of this - either because the victim fails to keep a stiff upper lip and go out with class, or simply because the manner of their death is so ridiculous and/or humiliating that how they react to it doesn't matter.

See also Obi-Wan Moment, "Facing the Bullets" One-Liner, Leave Behind a Pistol, Dying Truce, and Dying Moment of Awesome. For women, it may involve a Lipstick-and-Load Montage.

As a Death Trope, many spoilers will be unmarked ahead. Beware.