Visual Novel / Your Turn to Die 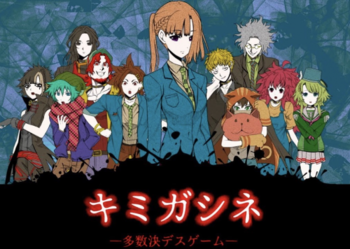 Sara Chidouin is an Ordinary High-School Student who attends the same school as her best friend, Jou "Joe" Tazuna, but at one point Sara begins to be stalked by an unknown person every day on the way home from school. After waking up late from class one night, Sara makes her way home escorted by Joe, only to find her mother completely unconscious on the floor and her house broken into. While Sara goes upstairs to check if her dad's alright and Joe phones for the police, both are abducted. The next thing they know, they find themselves strapped to a table with only five minutes to find an escape - or be crushed to death by the tables folding on top of them.

After barely escaping from the death trap, Sara and Joe soon find themselves in a facility trapped alongside nine other people, and are given an ambiguous task to piece together the parts of a doll for their next assignment. Left with little alternative or escape, Sara and Joe discover that whomever brought them here wants them dead, and things very quickly turn out not to be as they seem.

Described as a 'retro horror talky-action game', Nankidai's Your Turn to Die -Death Game By Majority- (aka Kimi ga Shine) is a freeware game made in RPG Maker MV that follows Sara, Joe, and nine others who find themselves trapped in a mysterious place filled with puzzles, mini games and paranoia. The game can be best summed up in tandem as a nod to other Visual Novels featuring Deadly Games, such as Danganronpa and Zero Escape, with a smattering addition of Darker and Edgier coupled with plenty of Psychological Horror to it; as the eleven individuals soon end up learning, the people who brought them into this game have tasked them with playing a Social Deduction Game that inevitably ends with each round having at least two people dying at the end of it, if not more; one whom happened to draw the Sacrifice card, and the other whom happened to be voted by majority rule to be the one's whose turn it is to die. What soon follows beyond that is a gradual exploration about the gradually-degrading sanity of all whom continue to play the game, a massive-spanning conspiracy that set this kind of game up before, and the gradual realization among them that whoever their captors are, they're dead-set on forcing the survivors to decide who lives and who dies by majority rule.

A Spin-Off side-game called Your Time to Shine: Island Existence has also been developed, which is a resource managing Alternate Universe with Multiple Endings. The current version is a "test" version that only allows Mishima and Kai to be selected as playable characters, but more characters are planned for future versions. Please note that Your Time to Shine contains spoilers up to the end of Chapter 3-1B for the main game.

Both games can be found here

, where they can be downloaded or played on a browser for free. On 28 August 2022, it was announced that the game would be released on Steam

, currently slated for a February 2023 release. While the Steam version is paid, the original download and in-browser versions remain free, with the final chapter being added to those sometime after the Steam release.

Tropes found throughout this series include: