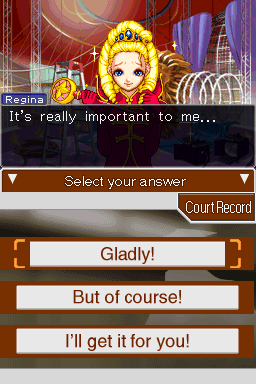 Choice #4: Hack the game to add "Sure thing!"
"That illusion of choice was just a formality. Your task has already been decided, you see."
— Shantotto, Dissidia Final Fantasy
Advertisement:

The video game version of You Can't Fight Fate. In video games, the main character has two jobs: in the plot, he is The Hero of his motley crew of rebellious aristocracy, mysterious girls, and many others. He's The Leader, the Designated Point Man, calling the shots. He's also, however, the player's avatar in the game world. Therefore, it's becoming increasingly common for the other characters to turn to you and ask (in the form of a multiple-choice question and Dialogue Tree) what they should do in any given situation.

The problem, however, is this: The writer already has the script plotted out, and your decision, whatever it is, is going to affect all of jack squat. Either the other characters will just ignore the answer and get on with what you're supposed to be doing, or they'll ask the question over and over until you make the "correct" choice. You might see some altered dialogue or a slightly different scene, but the plot itself will remain unchanged. In particularly egregious cases, the dialogue tree will give you multiple "yes" options but not a single "no".

Occasionally a game utilizing this trope will toss in a question where an incorrect answer results in a Non-Standard Game Over. Such questions are usually pretty obvious (the Big Bad asking you to become his disciple, for example), though, so it's easy to avoid falling into that trap. Either way, this represents the game forcing you to Follow the Plotted Line, period.

In some games, particularly in Sierra adventure games, answering a choice incorrectly can leave the game in an Unwinnable state. An example is the salesman in Space Quest I: The Sarien Encounter, where you have to refuse the first offer from him, then wait for him to reappear so he offers you a jetpack, which is critical later on. Guide Dang It!

This trope doesn't apply for games that make heavy use of a Story Branching, such as the Ogre Battle series, or most western RPGs. In those games, your decisions can and will direct the plot, albeit usually on a pre-programmed branch.

Another way to make these questions relevant is to tie them into Relationship Values — your decisions might not change the overall plot, but they will change how other characters perceive you, which might open or close off some future options for useful stuff.

Named after one of the first instances of the trope, from the original Dragon Quest.

See also Railroading. Compare Stupidity Is the Only Option, Morton's Fork. Contrast You Can't Get Ye Flask, where the game simply doesn't understand when you attempt to do something outside its scripted plot. Video Games and Fate can be a way to justify this in-universe. Known in real life as a Hobson's Choice, as detailed on the other wiki

Examples where giving the "wrong" answer makes it impossible to proceed until you give the "right" answer (including giving Non-Standard Game Overs):

Examples where giving the "wrong" answer has little or no effect:

Examples where there is no "wrong" answer available to choose:

At the beginning of the Nightmare Sequence, Max talks with Mr. Jefferson in a dark parody of the first episode's beginning. Every choice in the dialogue tree Max is provided with are disturbing and deprecating bits that are implied to be from Jefferson's warped perspective.

At the beginning of the Nightmare Sequence, Max talks with Mr. Jefferson in a dark parody of the first episode's beginning. Every choice in the dialogue tree Max is provided with are disturbing and deprecating bits that are implied to be from Jefferson's warped perspective.