Literature / To Be or Not To Be: That Is the Adventure 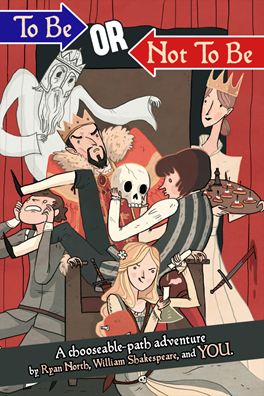 Hold Up, This Book Is Crazy
Advertisement:

To Be or Not To Be: That Is the Adventure is a Gamebook adaptation of William Shakespeare's Hamlet, written by Ryan North. Using the conceit that it is, in fact, the original story of Hamlet, from which Shakespeare lifted a single path and later turned that path into a play, the book allows readers to choose between multiple viewpoint characters and a number of plot tangents of varying levels of realism.

The book was funded by a Kickstarter campaign

that, when it ended, was the most successful publishing project in Kickstarter history, attaining 2,904% of its $20,000 goal.

A Kickstarter-exclusive prequel, Poor Yorick, was also made, with illustrations by Tyson Hesse.

It has also been adapted for the PC,

It has a sequel, Romeo and/or Juliet.

To Be or Not To Be: That Is the Adventure provides examples of:

Alternative Title(s): To Be Or Not To Be