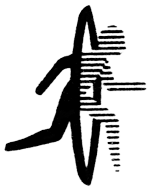 The series logo. We know what you're thinking.
Advertisement:

If you're looking for the classic novel by H. G. Wells, see The Time Machine.

Time Machine is a series of educational Gamebooks, published by Bantam Books in 1984-1989. Unlike many other works of this genre, the books only have one ending, reached usually by trial-and-error.

The premise is that the player is tasked by some unknown authority to travel to the past in order to unravel a historical mystery. Following a strict set of time-travel rules, the protagonist finds himself skipping back and forth through several centuries of history, braving dangers and somehow always coming across famous historical figures.

For six hundred years, the highest honor in England has been to be made a knight of the Order of the Garter. King Edward III began this order sometime in the 1340s. Members wear a blue garter of cloth around their sleeves, on which is written “Honi soit qui mal y pense.” This is the motto of the Order of the Garter. The Protagonist travels back to determine why the best knights in England choose a garter as their symbol and what their motto means.

The protagonist must take a picture of an Archaeopterix, the first bird. Most of the book consists of figuring out where and when the Archaeopterix lived, by hopping back and forwards through the Mesozoic and piecing together information.

The protagonist travels to 17th century Japan in search of a sword wielded by Miyamoto Musashi.

The protagonist accompanies Captain Phips in the seventeenth century in order to find the wreck of Concepcion, a Spanish ship carrying colossal amounts of silver.

Set during the Civil War, the protaonist must locate Harriet Tubman and find out what became of a slave named Thomas Dean.

An Oddball in the Series, as it sends the protagonist to The Future. This frees the writer from the shackles of historical accuracy, making the book essentially a Troperiffic showcase of pretty much every single Science Fiction trope in the book. The protagonist's mission is finding out the source of mysterious signals coming from Saturn.

Travelling through Ancient Greece, the protagonist is trying to find out the mystery of... take a guess.

The protagonist is sent to the Old West to learn why the Pony Express failed after 18 months.

The protagonist travels to Revolutionary War-era America to determine who fired the first shot of the American Revolution and retrieve the musket.

Emanuel Ringleblum was a famous freedom fighter and historian during World War II and the Holocaust. He has hidden several incriminating documents about the Nazis, and the protagonist must to travel back to Warsaw, Poland, and retrieve these documents.

The protagonist heads to the late nineteenth century to accompany Henry Morton Stanley in order to find out what is the source of Nile.

The protagonist is sent to Elizabethan England to determine which of Queen Elizabeth's suitors' ring she wore on her deathbed.

The protagonist finds himself in the times of The French Revolution, seeking a priceless diamond necklace

. The objective soon shifts from merely finding the treasure to using it to buy the life of an innocent French girl.

This mission has the protagonist discover why the famously kind and sensitive Queen Isabella permitted the Spanish Inquisition to take place.

The protagonist heads to America in the sixteenth century in order to investigate the rumors of the supposed "cities of gold" searched for by the conquistadors.

The mission is to help Scotland Yard solve a major case with political implications. An Indian prince vanishes, straining tense relations between the British Empire and India.

The protagonist must discover the ultimate fate of a battle sword wielded by Julius Caesar.

The protagonist goes with Captain Cook to Australia to find out the identity of the first European settler to live there long term.

The protagonist must find the very last of the dinosaurs prior to their extinction and as proof, bring back a dinosaur tooth.

The protagonist travels through ancient Britain, attempting to find the original inspiration for the King Arthur tales.

The protagonist is sent back in time to take a picture of the Red Baron on the morning of his final mission.

The protagonist is sent to both theaters of World War II, tasked with picking up a decoded message from each. This "Special Edition" is double in length to others in the series, mainly by having separate individual book-length War in Europe and War in Pacific sections that don't intersect.