United Nations Is a Superpower 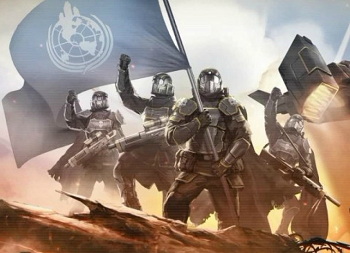 "In this fictional world, becoming the "head of the United Nations" means becoming the most powerful person on earth. The UN, in these books, is a kind of planet-wide federation to which every nation [...] belongs in the same way that the American states belong to one, united nation."
— Fred Clark on

the Left Behind series
Advertisement:

A fictional, 20 Minutes into the Future/Exactly Exty Years Ago/Alternate History version of the United Nations that possesses political, military, and/or economic power on par with a world superpower (or even hyperpower). Oftentimes, it operates and is structured like a huge federalized union of its member states. It could even take the next step: becoming a planetwide government.

As some of the examples below would suggest, Fun with Acronyms is practically a necessity.

In Real Life, the UN has no military force of its own and acts primarily through sanctions, when its members can be made to agree on anything in the first place. Some of its detractors go so far as to say that the UN has no real authority whatsoever, although this view is usually held by those who oppose whatever view the majority of its members hold. UN "military" are generally peacekeeping forces made up of units and equipment volunteered from member nations. As a result, many instances of this trope require that the UN adjust its structure to become much more powerful; frequently there is some form of world-threatening crisis that demands a unified multi-national force under UN command that results in the UN becoming far stronger.