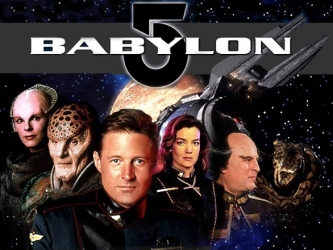 Babylon 5 is a Nineties Space Opera created by J. Michael Straczynski, running from 1994-1998. (A two-hour pilot movie, "The Gathering", first aired in '93). It was syndicated as a part of the PTEN network package for its first four seasons, and was hastily picked-up by TNT for its fifth.

The story takes place on Babylon 5, a giant cylindrical space station and sort of United Nations in space. It's not all roses, however, as Earth's military is woefully outmatched by those of the other delegates, resulting in what can be generously described as a tentative peace. It's up to the crew to throw cold water on old rivalries and keep these various factions from devouring one another; a task made difficult by an increasingly-reactionary and despotic Earth command.

B5 took serialization to new heights: more than half of the episodes fit into a series-long Myth Arc involving the "Shadows" and their machinations on Earth and other planets. JMS plotted out much of the series before filming began, with plenty of Rewatch Bonuses, and occasionally referred to it as a five-year long Mini Series or "one story told over five years". (He is in the Guinness Book of World Records for having written every episode of Seasons 3 and 4 single-handedly.) Time and budget constraints relegated some of the story to tie-in novels and comic books, namely a war fought between Telepaths and "Mundanes".

A majority of the non-human cast consist of Rubber-Forehead Aliens with powers verging on magic, and humans with telepathy who live openly (albeit rigorously-policed) among the public. Still, by TV standards, it's fairly-hard sci-fi. Although it leans toward the cyberpunk end of the genre, particularly its rejection of a post-scarcity future, it has some shining moments of idealism, as well: the overarching message seems to be, "Faith manages." Most of the crew learn a hard lesson about reducing conflict by forming relationships and exchanging information with those who are different than you; not only was the Earth-Minbari War started over a misunderstanding, but it only ended when the Minbari learned more about humans. Conversely, the Shadows are always seen plotting from the...well, shadows, manipulating events through bribery, threats, or mind-control—always from a safe distance. Mind-readers, detective work, and old-fashioned talking solved many of the show's issues.

B5's influence on English-language television and wider fiction is often-overlooked, since it only reached niche success in its lifetime. It's one of the first genre shows to feature a Myth Arc (the other stand-out being The X-Files), one of the first to use CGI renders for all its special effects instead of practical models (and it shows), and one of the first to have an internet fandom. B5 and its competitor, Star Trek: Deep Space Nine, were harbingers of the Second Golden Age of Television

" i.e. big-budget serialized dramas (The Sopranos being a product of the age).

The entire series has been released on DVD, and is also available for streaming on various internet platforms. Unfortunately the DVD picture quality suffered from significant transfer errors as part of the special effects conversion to Widescreen format (See the Trivia tab for details). The series received a HD remaster in 2020 which restored the 4:3 aspect ration of the original airing, and is available on iTunes, Amazon Prime, and HBO Max.

Has an in-progress Recap page. Vote here for the Best Episode.

Crusade, which ran for an abbreviated 13 episodes in 1999, shifts focus to the starship Excalibur and the search for a counteragent to a slow-acting bio-weapon which was set loose on Earth. Superficial resemblance to the plot of Star Blazers was cited, and JMS raged against the flurry of network notes. (Said notes were attacked more than once in the scripts themselves.) Opinions on the quality of the show is divided: To some, the series showed promise before its premature death; to others, markedly less.

There were several associated B5 Made-for-TV Movies:

Zathras explains to a befuddled Cdr. Susan Ivanova that there are ten members of the Zathras family, all named Zathras but pronounced slightly differently.

Zathras explains to a befuddled Cdr. Susan Ivanova that there are ten members of the Zathras family, all named Zathras but pronounced slightly differently.