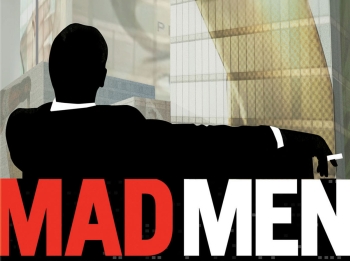 "Advertising is based on one thing: Happiness. And you know what happiness is? Happiness is the smell of a new car... It's freedom from fear. It's a billboard on the side of the road that screams with reassurance that whatever you're doing is okay... You are okay."
— Don Draper
Advertisement:

Mad Men is an American period drama surrounding an advertising firm on Madison Avenue, New York City, during the 1960s. The series deconstructs nostalgia of the "good old days" of America's past and explores the changing American landscape through the eyes of Sterling-Cooper Advertising and the world of advertising at the dawn of the decade that would change America forever.

The series, while an ensemble piece, focuses mainly on Don Draper (Jon Hamm), a charming rogue of an ad executive with major personal problems—mainly his inability to break his personal cycle of infidelity, as well as his Dark and Troubled Past.

As the show progresses through the 1960s, many seasons are tied to and punctuated by milestone events. Season 1 culminates in the 1960 election of John F. Kennedy, Season 2 takes place during 1962 (not before beginning with a brief recap of what everyone’s been doing since 1961) and ends with the Cuban Missile Crisis, and Season 3 runs through 1963 and featured the JFK assassination in its penultimate episode. Season 4 (1964-65) breaks this pattern, though much of it centers around The Vietnam War. Season 5 (1966-67) continues to deal with Vietnam; and Season 6 (1968)* OK, technically, it begins in December 1967 skipping the "Summer of Love" is highly chaotic (just like the year) and delves into the racial tensions at the time, including the assassination of Martin Luther King Jr.. The first half of Season 7 begins with Nixon's inauguration in January 1969 and ends with man's first moonwalk later in July. The final half continues and closes in 1970, with less focus on current real-life events and more on the professional and personal turmoils of the main cast.

The series is the brainchild of showrunner Matthew Weiner, at one point Number Two man on The Sopranos. Weiner originally pitched to HBO—with whom he had a working relationship, after all—but they turned it down. He then turned to AMC, which has run with the ball as far as Mad Men being to AMC as The Shield (or Sons of Anarchy) is to FX Network.

The show premiered on July 19, 2007 and has received fifteen Emmys and four Golden Globes. The seventh season was the final one; however, after the success they had with splitting Breaking Bad's last season, AMC elected to do the same with Mad Men. The first half of Season 7 aired in spring 2014, and the second half aired in spring 2015.

A character sheet and recap page are currently under construction, show them some love.