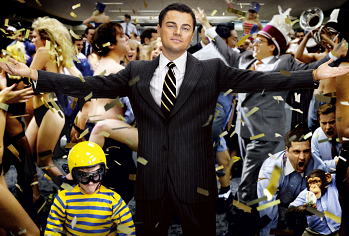 Just your average day at the office.
Advertisement:

A senior business figure who, regardless of their many duties and responsibilities to their company, is presented as ruled by their vices and only interested in self-gratification.

Expect the Executive to regularly blow insane amounts of money on pointless extravagances and self-indulgence, be it through sex, food, alcohol, drugs (cocaine is particularly popular from The '80s onwards), gambling, or just strange and bizarre activities.

Typically used as a satire of the (at least perceived) mechanics of hyper-capitalism and consumerism, they embody and often amalgamate some of the worst stereotypes of the industry. In more light-hearted settings, expect them to be presented as well-meaning and just enjoying spending their wealth in unusual and possibly extreme manners, while darker variations will often depict their activities as depraved, unpleasant and often flat-out illegal.

Don't expect their hedonism to ever have a negative effect on their standing within the business world, or interfere with their ability to do their jobs (not that they're likely to be seen actually working) as basic logic would tell you it should. Even if they're drunk and high 24 hours a day and blow this year's gross profit on hookers, they'll not only keep their jobs but are likely to get recommended for a promotion.

It's equally rare for them to make any effort to hide their vices (except maybe from their superiors, though they are likely to turn out to be just as sleazy and hedonistic if not worse). Expect to see them happily engaging in Hookers and Blow right in front of everyone during office hours as a minimum.

Male executives are common for this depiction, but more recent works have seen female examples as well. Potentially this may be a sign of further, more extreme low morals, but this is not always the case. If they're also a member of The Syndicate, The Mafia, or Those Wacky Nazis (and the like), in particular, they're expected to be competent in running the fronts even if they can be hedonistic and flaunt their riches everywhere.

While by definition required to be presented in a negative manner, don't expect this trope to be a complete summary of the executive's moral character or even their competence. It's entirely possible for them to reveal a hidden caring side, or potentially a surprising degree of functionality and ability.

Compare Sleazy Politician, another character which embodies negative stereotypes about their profession; Conspicuous Consumption, a similarly negative depiction of pointless and overly extravagant waste of wealth only one which focuses on physical possessions as opposed to actions and lifestyle; and Decadent Court, which is very much this trope's predecessor (only with a heavier focus on political intrigue than simple self-indulgence). Contrast Rich Idiot With No Day Job, who only pretends to be this (and potentially doesn't even have any responsibilities or a job); and Work Hard, Play Hard, when the characters wild behaviour is presented as in hand or even complimenting, their high capability and work ethic at their jobs.

A sister trope of Decadent Court and a supertrope of Trumplica.

Note: The key point of trope is the "excess", many entrepreneurs have vices and enjoy a good time like any other human. If they are merely presented as enjoying their free time or only get up to reasonable antics, then they don't qualify.