Day of the Jackboot 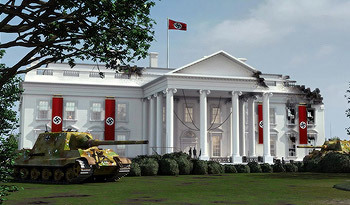 Nazis? In my capital? It's more likely than you think.
Just one shell and governments fall like flies
Kapow die!
They stumble and fall (bye bye!)
Backs to the wall (aim high!)
We’re having a ball
The tank and bullet rule as democracy dies
— Che, Evita, "The Lady’s Got Potential"
Advertisement:

Nazis, commies, and theocrats, oh my! These and other assorted scary people live far, far away from your country. There's no way that they could take it over.

... And even if they did, people would fight them off before they could get a foothold. Nobody would help them out.

... Well, even if they did, there's no way those kind of people could come from your country, right?

This trope is when Those Wacky Nazis, Dirty Communists, Mega Corps, Private Military Contractors or people who look and act suspiciously similar to either of them (or both of them) take over the protagonist's country or hometown, often but not always as the result of a war in which they invaded your hometown and won. Communism is a less common (and now even rarer) target for this now, thanks to the end of the Cold War and such, being replaced by Capitalism and Corporatism in the coming age, especially in Cyberpunk settings.

See also Invaded States of America and Oppressive States of America for something specific to the United States - columns of foreign troops marching down Pennsylvania Avenue can be a very powerful image when the last time this happened was 200 years ago. May involve The Coup, though it doesn't necessarily need to (that trope is more on the act itself, this trope is more about the after-effects).

If the newly minted dictatorship is restricted to your office, your club or your school, that's Tyrant Takes the Helm.

Has nothing to do with The Day of the Jackal.