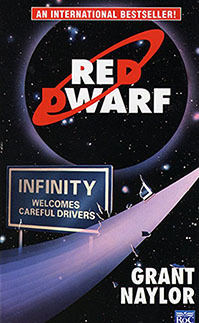 "The human race began as slime and ended as slime.
His name was Lister.
Celebrating his twenty-fourth birthday on a Monopoly board pub crawl round London, he ended up three million years from Earth, marooned in the wrong plane of the wrong dimension of the wrong reality, and down to his last two cigarettes..."
- Red Dwarf Omnibus blurb
Advertisement:

Between 1989 and 1996, four Tie-In Novels were published for Red Dwarf, but in a different continuity (which split into two continuities itself after the show's creators ended their collaborative partnership).

The first novel provides substantially the same opening as the TV series, but with more detail. David Lister's birthday party begins in Brighton, and apparently ends on Mimas. At any rate, that's where he wakes up with a wicked hangover, no money or ID and a worrying rash. He takes to stealing taxis in order to try to make enough money for a ticket home. One of his fares is Arnold Judas Rimmer, a low-ranking crewman on board the ship Red Dwarf. After some hijinks involving Rimmer's visit to a robo-brothel, Lister signs on with the Red Dwarf in the mistaken belief that this will get him to Earth faster. When he learns that the ship is on a multi-year mission to the outer solar system, at the end of which he will be an old man (over 25, by Lister's calculation), Lister comes up with a scheme to spend the voyage in stasis, and keep his youth. He purchases a cat at the next landfall, and ensures that he is found to own it, upon which he is put in stasis as a penalty for bringing an unauthorized life-form on board. Shortly afterwards, the crew is killed by a radiation leak, and Holly, the ship's computer, takes it into deep space. Three million years later, the radiation has fallen to survivable levels, and Lister is let out of stasis, to find that his only companions are Holly, Arnold Rimmer's holographic ghost, and the last living descendant of his pet cat, although they soon find a crashed ship inhabited by the mechanoid Kryten, who killed the crew and destroyed the ship by giving the computer components a good wash.

Infinity Welcomes Careful Drivers by "Grant Naylor" (1989)
The above summary describes the events of this novel. In the climax, after an adaptation of the "Me2" storyline, the crew seemingly arrives at Earth... only to end with The Stinger that they have, in fact, fallen into the grips of the Total Immersion Video-Game "Better Than Life".
Better Than Life by "Grant Naylor" (1990)
The only direct sequel of the four novels, this opens with Lister, Rimmer and the Cat escaping from "Better Than Life", only to find that in their absence, Holly has had to switch off due to a failed attempt to restore his intelligence that instead drastically reduced his lifespan. This has left Red Dwarf on minimal power and plummeting into the path of a planet. Attempts to blast the planet out of the ship's way leave Lister stranded on the planet, and the rest of the crew stuck on the event horizon of a black hole. By the time they escape, Lister has become an old man on a long-abandoned planet, which he has begun slowly terraforming back to a livable state with the aid of the giant cockroach inhabitants. When he returns to the ship, a polymorph sneaks aboard and starts stalking the occupants for their emotional energy. Although they ultimately kill it, Lister dies of a heart attack. The rest of the crew fix this by placing Lister into a dimension where time runs backwards, promising to return for him when he has reverse-aged back to his young adulthood, and giving him a chance to enjoy a backwards life with Kristine Kochanski.
Last Human by Doug Naylor (1995)
The first of the "trilogy closer" novels, and where the continuity of the book first forks. Having de-aged back to his young adulthood, Lister and Kristine return to Red Dwarf and the forwards-temporal universe. After a number of offpage misadventures, they run into trouble when they enter a civilized space-nation made up of Gelfs, where Lister falls afoul of corrupt laws being used to gather people to be used for a terraforming experiment. Things are further complicated when it turns out that his prison is also home to a Lister from a parallel universe, one where Lister became a psychopath, who escapes and is taken aboard Red Dwarf before they realize who he is. The terraforming world turns out to be home to a violently destructive psionic entity called "The Rage", a living embodiment of the resentment and fury of all the injustly-imprisoned and tortured souls who were forced to be part of the experiment. The Rage ultimately kills the Evil Lister, before Arnold Rimmer, having been emboldened by meeting the son he never knew he'd fathered on Yvonne McGruder, commits a Heroic Sacrifice to destroy the Rage. The experiment is finally completed successfully and the planet becomes a paradise, where Lister and Kochanski decide to become the Adam and Eve of a new human civilization.
Backwards by Rob Grant (1996)
The second of the "trilogy closer" novels, and notable as amongst a very small amount of Dwarf material written by Grant solo. The novel opens with Rimmer, Kryten and the Cat returning to Htrae, the backwards Earth, to pick up Lister, only to find themselves caught up in an unforeseen chronal incident involving Kryten accidentally reverse-murdering a man, stranding them on Htrae for a further ten negative years. Returning to their own dimension, they find that Red Dwarf has been captured by the last remnants of the Agonids — Killer Robots created and then abandoned by humanity centuries ago who have transformed the Dwarf into a prison/torture palace/obstacle course, where they plan to imprison Lister and then fight it out to see which of them will get the privilege of torturing Lister to death. With Starbug severely depleted of power, the Dwarfers have no choice but to return to the Red Dwarf, but are interrupted when Ace Rimmer, a parallel version of Rimmer who is a total badass instead of a total smeghead, transports into their dimension. They make plans together to overcome the Agonoids, but ship repairs are disrupted when one Agonoid, having been launched into space as a result of internecine conflict aboard the Red Dwarf, lands on their ship. Ace Rimmer makes a Heroic Sacrifice to kill the Agonoid, and the Dwarfers grimly return to the Red Dwarf, where they find that the Agonoids have been all wiped out by the most malevolent and ambitious of their kind, as he launches from Red Dwarf and traps them aboard Starbug. They manage to defeat this last Agonoid, but not before he infects Starbug's NaviComp with the Armageddon Virus, which will send Starbug and Ace's attached ship crashing into a nearby planet. Kryten makes a Heroic Sacrifice to try and come up with an antidote to the Armageddon Virus, with the crew assisting him by using the Virtual Reality gaming console to link into Kryten's mind, but the virus is destroyed too late; Kryten and Rimmer are both dead, and Starbug doesn't have enough fuel to stop from crashing. Lister and the Cat cram into Ace's ship, detach from Starbug, and jump to a random new dimension. By good fortune, they arrive in a parallel reality where Kryten and Rimmer never interfaced into the Better Than Life game, resulting in this universe's Lister and Cat starving to death. Asserting that this is as good as it'll probably get, Lister and the Cat begin docking procedures, ready to make a fresh start in this dimension.
Advertisement: