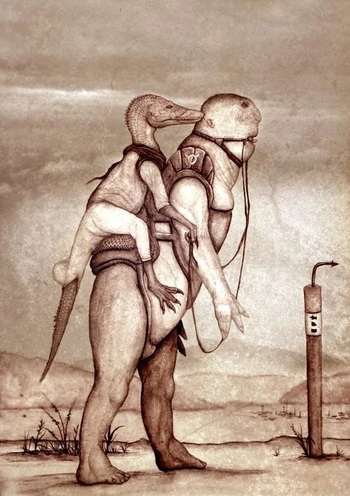 A human being... and his owner.
Reject humanity, return to monke.
—An anarcho-primitivism internet meme evoking this trope
Advertisement:

Many works of Speculative Fiction explore the definition and nature of humanity, and how changing conditions, technology and culture may push our current understanding of what makes us human. Despite how far a given work's humans may vary from the norm, however, they will typically retain some measure of higher intelligence and technology. Still, some works go further than this and explore what would happen if the things we consider most central to our nature, our brains and tool-making intelligence, were stripped away as well.

The result of this is a creature, usually a human, that lost its self-awareness and higher intelligence and become a simple beast. Depending on the setting, this may be the extent of the modifications or the creature may also display any degree of physical changes — fur, increased or decreased size, altered proportions, claws and fangs, or anything else pertaining to whichever ecological niche it now fills. The most common version is a creature resembling a non-human primate or a Frazetta Man in appearance and behavior, but it's not entirely uncommon to see humans transformed into aquatic, seal- or whale-like creatures.

In certain cases, in inversions of humanity's usual relationship with beasts, animalistic humans may be paired with sapient animals who keep them as livestock and beasts of burden or hunt them like prey.

There are a few reasons for why a work might portray such beings. One is shock value and emotional impact. Intelligence and a status above that of other creatures are fairly central to how we view ourselves, and recognizably human creatures with no intelligence or awareness can be profoundly unsettling to deal with, both from an Uncanny Valley perspective and from the standpoint of seeing ourselves reduced to such a lowly status. Seeing humans kept as domestic animals, whether by the descendants of their own pets and livestock or by other humans, can also be very unsettling.

Another reason is to make a point about natural selection and subvert Goal-Oriented Evolution, especially the idea that humans are bound to become more "perfect" or intelligent over time. Animals routinely lose previously characteristic or advantageous traits when these cease to be useful or become too expensive to maintain — birds becoming flightless is a textbook example of this. Complex brains are enormous energy and resource sinks and it's entirely feasible that, in a situation where complex thought would not provide a clear survival benefit, natural selection would favor the loss of large brains, as less intelligent humans could then allocate the resources that would have gone into them somewhere more beneficial.

The primary issue with this concept is that sapience is a minor singularity in the system of evolution, a singularity being a point in a system where the normal rules no longer apply. Complex intelligence allows creatures to develop new behaviors and technologies to respond to changing needs and environmental pressures, negating significant advantages to long-term physical changes. Even a deficiency in sustenance, the one challenge tailored to sapience's only drawback, could be overcome by improving farming technology or even by directly removing whatever was causing the sustenance deficiency. Note, however, that isn't an absolute factor — a number of historic human societies are known to have died out or severely declined due to drastic environmental changes, for example.

While humans are the ones most commonly used in this, it's also possible to apply this concept to any sapient species. The concepts of downfallen grace, shock at formerly-intelligent beasts and unsentimental evolution can just as easily be applied to fantasy races or alien species.

See also Human Subspecies and Our Humans Are Different, as most examples of this are human. For less extreme versions, where humanity still regresses but remains sapient, see Future Primitive, Feudal Future, and Stupid Future People (and, looking from the opposite end, Advanced Ancient Humans). May overlap with Human Pet and People Zoo. See also Was Once a Man for instances where individuals are transformed into monstrous or degraded forms that may or may not still be sapient.

Contrast Transhuman, for situations where humans become more intelligent, as well as Uplifted Animal and Animal Is the New Man.