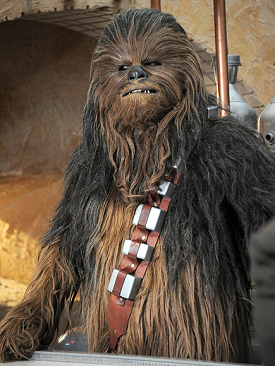 Bears are wonderful creatures. If you want to create an Intelligent Gerbil alien from one, you don't have to alter its appearance much, since they can already take bipedal form and are effectively Humanoid Aliens already (to note the most obvious similarities besides the partial bipedalism, they are plantigradenote Walk with the soles of their feet to the ground, unlike most other large mammals, which walk on their toes omnivores). Indeed, any furry humanoid creature that doesn't explicitly appear to be some other kind of creature will appear more or less ursine. Beary Funny, Beary Friendly and Bears Are Bad News are all possible.

Another possible reason for the presence of this trope is the apparent association between bears and stars, based on the famous Ursa Major/Ursa Minor (Greater Bear/Smaller Bear respectively) constellations.

A special group of them are not just any old bear, but explicitly teddy bears. These are either an extremely good natured race, or for ironic effect, extremely nasty.