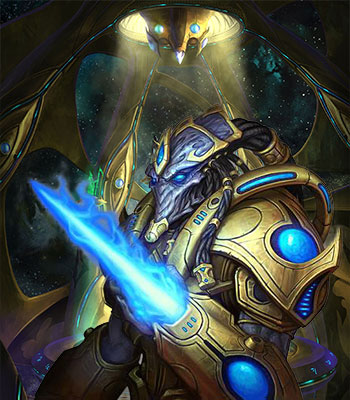 In science fiction settings with a myriad of alien races, there is usually one race that possesses technology more advanced than the other species. They have been in space for thousands of years longer than the other races, and show it. However, they aren't Sufficiently Advanced Aliens (though they might use Sufficiently Advanced Bamboo Technology, depending on their sense of aesthetics). Despite being thousands of years ahead, these guys are merely "much more advanced", but have not reached the godlike levels implied by that trope.

They are not omniscient either, but they consider themselves knowing enough to be Older and Wiser than everyone else. Their attitude towards other races may range from patronizing to hostile as less developed species are considered naive children at best and barbaric savages at worst. This attitude is at least partly justified. Having experienced a long, varied and, by extension, likely much more violent history than everyone else, they have now "matured" out of petty concerns that drive the expansion and conflict of less established civilizations. However, as a tradeoff, they usually become a monolithic and non-diverse (even by fictional standards) society stuck in cultural stasis and occasionally centering their whole existence around a single dogma.

While they may be an overarching force of good or evil overshadowing the entire plot, if they ever take center stage, their supremacy will be often called into question so that they will be proven Not So Invincible After All.

This often sets the plot for a Stock Aesop. There are still many lessons they can learn from the "younger races", and they are generally reluctant to do so due to being a Proud Warrior Race, Proud Scholar Race Guy, Proud Merchant Race or any other example of arrogance. In order to make them rethink their disposition, their mold is often broken over the course of the plot - either by our protagonists, or by having them encounter a problem they haven't met before, and where their experience fails, they are forced to rely on unconventional tactics and forge an alliance with those they have dismissed previously.

Sometimes, however, they fail to listen, in which case their tradition, lack of ability or desire to progress causes them to go into a period of decline; having once ruled a mighty empire, they would only be found on a handful of worlds and it is increasingly rare to even meet one. Despite this, even if they would rather remain obscure and reclusive, the fact that they have technology far in advance of everyone else causes the rest of galactic society to treat them with kid gloves.

Eventually, they can become fully extinct or, having no more interest in the universe's affairs, Ascend to a Higher Plane of Existence. Over the eons, they become shrouded in mystery, only referred to in hushed tones as the Precursors. Their legacy, however, lives on in the form of their relics and technology, up for grabs even many millennia later. Humanity and other species that follow in their wake occasionally find these relics, collect and study them and sometimes use them without fully understanding them, occasionally unleashing the best and worst of their Lost Technology upon the universe once again.

A Justified Trope, in that probability, says (given the age of the universe as compared to the age of the human race) that some alien races we might eventually encounter would likely be much older and thus much more technologically advanced than we are. Obviously justified if the aliens are coming to Earth (well, most of the time), as they have the technology to cross the galaxy to meet us, and it wasn't the other way round.

Often, the elder aliens will play a similar role to that of elves in fantasy works, and not infrequently their esthetic also borrows from elven imagery. Compare Our Elves Are Different.