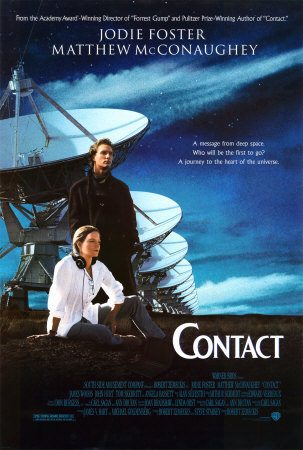 If it's just us, it seems like an awful waste of space.
"Some kind of celestial event. No... no words. No words to describe it. Poetry! They should have sent a poet. So beautiful. So beautiful... I had no idea."
— Dr. Arroway
Advertisement:

Contact is a 1997 movie directed by Robert Zemeckis and based on astronomer Carl Sagan's novel of the same name, although in an odd case, Sagan wrote it first for the screen, then turned it into a book after it ended up in Development Hell. Unlike most Hollywood science fiction adaptations, this attempted to stay true to the original and get the science right. Sagan died some months before the film was finished, so we don't know what he would have thought of it.

Dr. Eleanor "Ellie" Arroway (Jodie Foster) is a driven yet gifted scientist on the failing SETI (Search for Extraterrestrial Intelligence) project, who confounds her critics when a powerful signal is received from Vega, 26 light years away. The signal is encoded with technical instructions for building a Faster-Than-Light Travel device which can send a single ambassador to the stars. The film explores issues of science vs. faith, and whether the two are mutually exclusive.