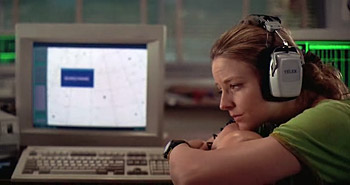 "Holy Cheez-Its! What do we do?! Nobody ever told us what to do! The only reason I took this job is because you never have to do anything!"
— Antarctic Surveillance Station Operator, Monsters vs. Aliens
Advertisement:

In a variety of jobs, a person has to be watching out for something important, poised and waiting for a certain emergency situation. For example, a big satellite dish could be constantly listening for any signal, any sign of life from the stars. Or it could be some sort of asteroid early-warning system, or it could even be an inbound-missile warning system on a space station. And in movies and TV, at the other end of all that surveillance equipment is a tiny shack/room absolutely stacked with computer equipment, one integral computer screen, and the Surveillance Station Slacker. He's usually one guy (very rarely female) sat watching the readouts for weeks with absolutely nothing happening, in a state of utter boredom. Invariably this guy will be goofing off all day knowing that the screen will never bleep, eating pizza and watching a portable TV or something, and due to this is often portrayed as overweight.

If the computer screen DOES bleep all of a sudden, the alien signal IS picked up or whatever, the Slacker will quite often panic and not know what to do, maybe even having to refer to an old set of instructions for this eventuality. He might even ignore the signal, putting it down to a faulty system, and just turn back to the TV.

The Slacker sometimes comes with a workmate/companion, someone to tell him to stop lazing about so much, who is often portrayed as a grumpy elderly man.

Often overlaps with Insecurity Camera/Useless Security Camera and The Guards Must Be Crazy, and they may be Playing Games at Work.