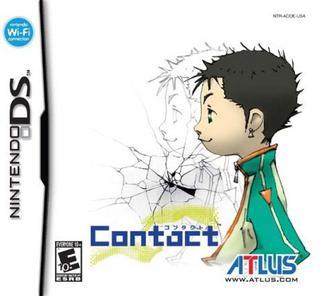 Terry might well be in a sticky situation...
Things you WILL find in Contact: Monkeys. Cosmic terrorists. Powerful attack stickers. Fishing. Cooking. Humor. Fun with Nintendo Wi-Fi. Deeper meaning in life. Costumes that increase your power and make you more fun to be around.
—The back cover of Contact
Advertisement:

From the mind of Akira Ueda, developed by Suda51's Grasshopper Manufacture and published by Atlus comes a Nintendo DS RPG entitled Contact.

A professor from an unknown galaxy is chased and attacked by the Klaxon Army (called the "CosmoNOTs" in the US release), and his UFO crash-lands on an unknown planet, scattering its power cells everywhere. In order for him to get his ship back into commission, he enlists the help of Terry, a boy he meets after crash-landing, to help him get his power cells back through the use of specially-developed Decals (yes, the kind you stick on your body).

In Contact, you control Terry and guide him from island to island, searching for the power cells, beating up monsters, and making friends with the locals while on the lookout for the CosmoNOT gang, as they want the cells for their own purpose. As you play deeper and deeper into the game, the Professor's motives become less and less clear...

Absolutely no relation to the 1997 movie of the same name starring Jodie Foster or the Carl Sagan novel it was based on, nor the electro-mechanical pinball of the same name.