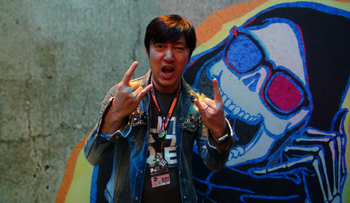 If you were to take David Lynch, Quentin Tarantino, and a Luchador, and lock them in a room surrounded by Sci-Fi movies, comics, anime, manga, and Andy Warhol paintings, all viewed lovingly yet through jade colored glasses, you might get something close to the inside of Goichi Suda's mind.

Goichi Suda (born January 2, 1968), or Suda51 as he's better known ["Goichi" is composed of the Japanese numbers for five ("go") and one ("ichi")], is one of the most Mind Screwing game designers out there. He's the head of Grasshopper Manufacture and is known for making games which create a unique, if slightly/extremely unsettling, experience. Common themes in his games include: assassins, hotels, briefcases, Mexican wrestling, severed heads in paper bags, the Moon, and random pop culture references, especially towards Punk subculture. He frequently collaborates with music composers Masafumi Takada and Akira Yamaoka, and writer Masahii Ooka.

Games written and directed by Suda51:

With many more games worked on or produced.