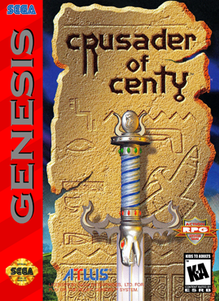 An 1994 Action-Adventure game for the Sega Genesis, also known as Soleil in PAL regions and Ragnacenty in Japan. It was published by Atlus.

Gameplay and visuals are similar to those in The Legend of Zelda: A Link to the Past or the SoulBlazer series, with a few exceptions. Instead of collecting items, you have animals join your party. Two animals may be equipped at a time. Certain animals may be equipped with certain other animals to produce a unique or upgraded effect.

The game starts with your characternote His default name is Corona on the birthday where he receives his first sword and becomes a man. He inherits the old sword of his father, a great swordfighter and hero. After learning to throw it, you venture out into the world to fight monsters and have a good ol' time. Except that not all is as it seems.

Crusader of Centy provides examples of the following tropes: