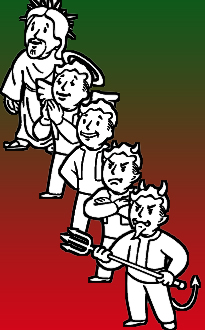 So, what will it be? The Stairway to Heaven, or the Highway to Hell?
"It seems as though the floodgates are beginning to creak open on inFAMOUS, including the revelation of Karma Moments - a tracked morality system with effects on player progression. It wasn't meant to be funny, but for some reason we found it very funny, because like many mechanisms of this kind your choices tend to come down to being an omnibenevolent supercherub or the Goddamned devil."
— Penny Arcade's Tycho Brahe, on inFAMOUS
Advertisement:

Some games employ a type of morality in their gameplay. Actions taken within the game affect the player, and sometimes how the player is treated by the plot and Non Player Characters. This happens even if there were no witnesses to the action and no circumstances that point to you. Some games will make it impossible for one to continue if their Karma Meter is too low, or give a bad ending. Others will simply result in the character having an "evil alignment" and playing this way.

In some games, it doesn't matter whether you're good or bad but how far you lean to one side is rewarded — there are bonuses for being very good or very evil but not moderate. This has the annoying side effect of rewarding if not forcing the doing of completely pointless acts of malice, killing beggars and robbing empty houses just to be "more evil", and punishing an evil player for doing good quests or deeds (depending on how harsh the meter is) and vice versa, stifling any real choice altogether.

Furthermore, games with a Karma Meter often include a Golden Snitch decision that will heavily push you towards (or even lock you permanently in) one extreme of the morality gauge regardless of your actions up to that point. This means that in a game with Multiple Endings, your ending is decided more by that one single choice rather than an accumulation of all of your deeds and misdeeds.

Except for the Golden Snitch event, typically no act is more than three to five times more evil or good than any other. This leads to the odd situation where a character with a perfect record of finding lost pets and helping old ladies with their groceries can bludgeon a school bus of Girl Scouts to death and pour napalm on their corpses while singing hymns to Satan and scarfing down a stack of Kitten Burgers and at worst go from "saintly" to "very good" on the Karma Meter. And unless the Karma changes are limited to plot events, go right back to "saintly" by killing some monsters or giving money to beggars.

Despite its flaws, the trope has its purposes, not least of which is maintaining consequences to the player's actions in the absence of Story Branching. The player makes hundreds or even thousands of choices over the course of a game, and developing the game to include direct, ongoing consequences for all those decisions would be extremely taxing from both a writing and programming perspective. Thus, for the sake of feasibility, many developers just stick with this trope, having the Non Player Characters and game world react less to each specific choice you're making and more to your current position on the Karma Meter instead, allowing the player lots of flexibility in how they choose to play while avoiding the rigorous workload demands that the equivalent amount of Story Branching would entail. (that said, plenty of games use both tropes, and games that go the whole nine yards and log every decision you make to call upon them later, such as the Mass Effect series, aren't unheard of, either)

May be paired with Video Game Caring Potential and/or Video Game Cruelty Potential, making players more inclined to select one side. Compare Relationship Values and Alliance Meter. If your position on the karma meter is displayed on the player character, it's Character Model Karma Meter. See also Character Alignment, Sanity Meter, and 100% Heroism Rating.

The game is full of karma choices between "Hero" and "Evil" karma.

The game is full of karma choices between "Hero" and "Evil" karma.