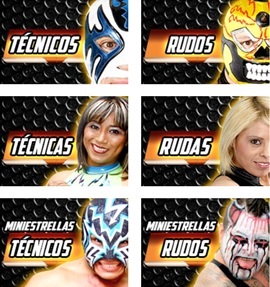 Tercera caída!* From left to right, Atlantis, Mephisto, Marcela, Amapola, Eléctrico, Demus 3:16
You can't believe all the things I've done wrong in my life.
Without even trying, I've lived on the edge of a knife.
When I play with fire,
I don't want to get myself burned.
To thine own self be true,
So I think that it's time for a turn....
— "Burn In Hell" by Twisted Sister
Advertisement:

Tropes about characters shifting on the morality axis, redemption and corruption.

See Sorting Algorithm of Face-Heel Turning for a sheet of factors figuring into the probability of a turn.

This is a sub-index of Betrayal Tropes. Spoilers abound.

open/close all folders
Good to Evil
A pacisist becomes a killer
Neutral to Aligned
Advertisement:
Evil to Good
Either

The alignment change of an individual character may be caused by (or have repercussions on) their relationship with others.
Specific Aversions/Subversions
... where an alignment shift should occur but does not.