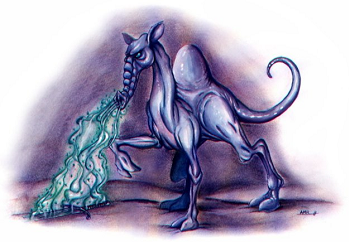 "The beast devours magic and all things magical."
— Mozenrath on the Thirdac, Aladdin: The Series
Advertisement:

The Magic Eater is Exactly What It Says on the Tin: a character that feeds on Magic and/or magic users. If the main character(s) use magic, then the Magic Eater will present a clear threat to them. If Pure Magic Being exists, the Magic Eater may try to prey on them.

Often, eating magic allows them to nullify spells or use them themselves. In some cases, a Magic Eater will from simply eating magical energies to being a full Mage-Hunting Monster. See also Phlebotinum Muncher, especially when it's Munching a Sci-Fi element rather than magic.

Subtrope of Abstract Eater and, through that, of Fantastic Diet Requirement. See also Mana Drain.