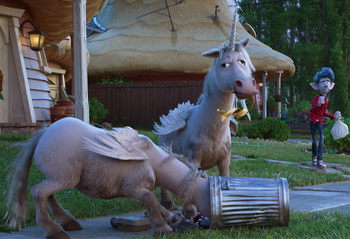 "Ma, we got unicorns again!"
"They sure come around a lot, they must really like you!"
"The only problems are the pests. Most places have mice or mosquitoes. We have... dragons."
— Hiccup, How to Train Your Dragon
Advertisement:

Fantastic Vermin are everyday creatures — a setting's equivalent of city, household or garden pests — that are fantastical or otherworldly in some way. These can include alien animals, miniature versions of fantasy creatures, common animals with peculiar traits such as vivid coloration, chimeric anatomies or magical properties, or anything along those lines.

One purpose for including fictional vermin is to emphasize the fantastical nature of a setting — a place must be magical and wondrous indeed if even its pigeons are otherworldly, and flocks of tiny drakes or fairies or alien bugs flitting through the streets is a pretty obvious sign that the story isn't in Kansas anymore. Similarly, such creatures may be a logical derivation of a world's magical nature: if a setting is permeated with magic and magical creatures, or its ecology is distinct and separate from the mundane world's, then it's likely that even its smallest denizens will be unusual in some way — not every creature in the world can be something rare and majestic, after all.

Another common aspect of this is the exploration of day-to-day issues in fantastic settings. If regular rats and pigeons already cause a fair amount of damage and headaches through their activities, then pests that can drool acid or set things on fire must be even more problematic to deal with, and can thus provide challenges even to cultures armed with magic or more advanced technology than ours. These effects may also be tailored to a world's endemic technology or magic, affecting it in specific ways beyond what mundane pests could do — for example a creature whose secretions harm the local Unobtanium, or which feeds on magic.

If these things go from being minor annoyances to an active danger, they may well become a Horde of Alien Locusts.

These creatures will often be treated as Fantastic Fauna Counterpart to real-life pests species such as rats, mice, pigeons or raccoons. See also Alien Kudzu, for the closely related concept of fantastic weeds, and Explosive Breeder, which may of these creatures often are. Contrast Endangered Species and Fantastic Livestock.