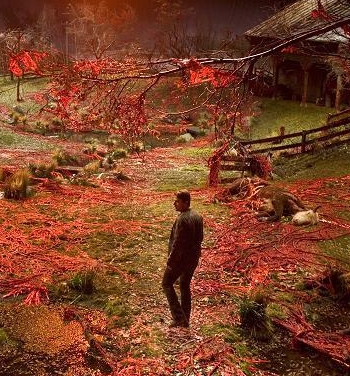 At least it prevents soil erosion.
"Next day, the dawn was a brilliant fiery red, and I wandered through the weird and lurid landscape of another planet, for the vegetation that gives Mars its red appearance had taken root on Earth. As man had succumbed to the Martians, so our land now succumbed to the red weed. Wherever there was a stream, the red weed clung and grew with frightening voraciousness, its clawlike fronds choking the movement of the water. And then it began to creep like a slimy red animal across the land, covering field, and ditch, and tree, and hedgerow, with living scarlet feelers. Crawling. Crawling."
— The Journalist, Jeff Wayne's Musical Version of The War of the Worlds
Advertisement:

One of the possible side effects of an Alien Invasion.

In essence, Alien Kudzu is a plant-like, fungus-like, or otherwise predominantly sessile alien lifeform that infests a planet's environment and begins reproducing itself rapidly. It is almost always harmful to the local habitat, whether directly (such as giving off toxic gases) or simply by outcompeting and choking out the local vegetation. It is also usually very difficult to kill, making the act of reclaiming these infestations take up great deals of time and resources (if not outright impossible).

The aliens may release it deliberately as part of their invasion in order to Terraform the Earth into a planet more suited to their own environment, or it may be just the result of the alien plants naturally being able to outproduce the local competition.

Alien Kudzu can sometimes be used for a Meat Moss effect as a sort of visual shorthand to show that things are really, really bad.

Note that neither the plant nor the invaders need to actually come from another planet; "alien" in its original sense simply refers to something foreign and/or not native. (Indeed, in Real Life this is common enough that we have a word for it — invasive species — and the kudzu plant is one of the most notorious examples, as any Southerner can rightly attest

.) They usually are, though, especially in Science Fiction settings.

Subtrope of Introduced Species Calamity. Compare Explosive Breeder and Fantastic Vermin, which are similar concepts applied to animals, and Botanical Abomination. Named after the same plant as Kudzu Plot, but the two tropes are unrelated. It's also not to be confused with the Newspaper Comic of the same name.