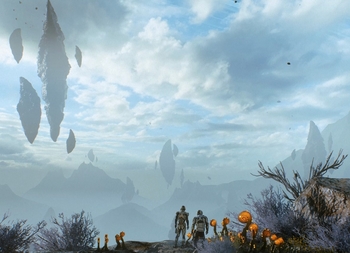 The big floating rock would make a great place for a summer home.
"We're definitely not in the Milky Way anymore..."
— Ryder, Mass Effect: Andromeda
Advertisement:

A hallmark of Science Fiction, an easy way to signify that a setting is not on our typical Earth is to have strange landmasses — particularly ones that float, form odd shapes that might resemble creatures or parts thereof, or even seem alive in some way — for example, a Turtle Island.

Sometimes, the trope intertwines with bizarre plant life, making the treetop canopies look bizarre compared to Earth standards, covering the planet with tentacle-like vines, or coloring the landscape with other colors besides the standard brown and green you'd expect to find on a lush world. Animal remains often come into play as well, usually as immense skeletons or crania of dragons, giants and monsters littered around the landscape.

This trope is usually a wet dream for those who like Surrealism, especially Surreal Horror.

Sister trope to Alien Sky and Alien Sea. Contrast All Planets Are Earthlike. See Starfish Aliens for when the aliens are just as weird as their planet. If the planet used to be Earth, see Hostile Terraforming. See also Weird Weather, although that can occur on Earth as well.