This page is exclusively about Star Wars Legends content, comprising material made before Disney-owned Lucasfilm gave the entire Expanded Universe a Continuity Reboot. If you want information about the new EU, look here. 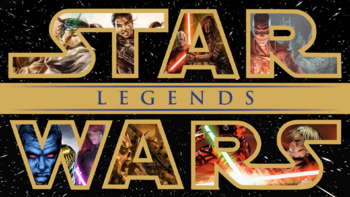 Star Wars Legends, alternatively branded as Star Wars Vintage on Disney+ and formerly known as the Star Wars Expanded Universe, was a collection of non-canonical stories meant to complement and build upon the worlds of the Galaxy Far, Far Away in ways that the Original Trilogy, the Prequel Trilogy, and Star Wars: The Clone Wars would not. While it technically began with the novelization of A New Hope, which was actually released just over half a year before the 1977 film, it didn't properly get started until the likes of Marvel's Star Wars, Splinter of the Mind's Eye, and The Star Wars Holiday Special really got the ball rolling. From there, the continuity expanded in multiple, sometimes contradictory directions covering nearly every imaginable angle to the universe.

George Lucas had an interesting relationship with the Expanded Universe. While he generally regarded it as glorified fan fiction that he could utilize to market future movies and shows, he looked at it from time to time and found works that he liked, some of which he drew inspiration from. For instance, he initially named the unseen planet that served as the Imperial Capitol "Imperial Center", but he was advised to rename it "Coruscant" after that name was established in The Thrawn Trilogy. Likewise, Aayla Secura first appeared in Star Wars: Republic, a tie-in to the Prequel Trilogy, but she appeared as a supporting character in the last two films of that series due to Lucas liking her character design. Conversely, several stories in Lucas's movies and The Clone Wars brazenly contradicted established lore in this iteration of the setting, leading Lucasfilm's authors to have to create elaborate explanations for every inconsistency to help everything make sense. Lucas also held veto power over certain concepts; he rejected the original pitch for Dark Empire to have a villain use the likeness of Darth Vader, but was supportive of the concept of Emperor Palpatine creating clones of himself.

A major shift took place almost a year and a half after Lucas sold his company to Disney. On April 25, 2014, Lucasfilm Ltd. announced that in preparation for the Sequel Trilogy and all future works, the original Star Wars Expanded Universe would not appear in any future Star Wars materials (which, as it later came to light, was Lucas's plan anyway). Past tales of the Expanded Universe were subsequently announced to be reprinted under the Star Wars Legends banner, and a new continuity was formally established, consisting of what Lucas considered canon (the Original Trilogy, the Prequel Trilogy, and The Clone Wars), and all future material released from that point onward (unless otherwise specified). In addition, Disney would choose not to produce new works in the Legends continuity — aside from things that were already in the pipeline (like Heir to the Jedi, which was retooled to fit the new canon), or new content for The Old Republic (which was still successful and was being produced by Electronic Arts, who they gave a contract for the Star Wars video game license to) — in order to put nearly all of their efforts toward fleshing out the new universe.

The move to wipe the slate clean was done in order to give new Star Wars creators free rein to work within the universe without specific restrictions, such as Chewbacca being crushed by a moon; his canon counterpart ended up surviving past the end of The Rise of Skywalker, over a decade after his demise in the old canon. Creators hired by Lucasfilm would later integrate various characters and concepts from Legends into the new universe, but did so in such a way that the new material would better serve the ground rules set by Lucas himself (between his movies, The Clone Wars, and various unmade projects of his like the Star Wars: Underworld television series), and serve the "one big story" that the new batch of creators wanted to tell. (Incidentally, both Rogue One and Solo, Disney's first two non-episodic films, were directly inspired by planned story arcs for Underworld.)

Word of warning: Legends is vast. Therefore, please only add works that have their own pages on this wiki. The books listed are each part of their own series. They are heavily outnumbered by standalones and two-part series. A list of all Star Wars media is here.

Warning: Huge. To give you an idea, pretty much every background character seen in the films, even that alien guy just passing by the screen, has not only a name and a species listed, but a fully fleshed-out biography. Typically no more than that, but still. Oh, and even the movie's background props have received their own stories. As of mid-2012, the list shows 2,337 items. Thankfully, a book has been published

that ties everything published up to its release date into a neat timeline and has summaries of most of it. Conversely, the new Expanded Universe established by Disney is easier to catch up on... for the time being.

Quite a few entries have a questionable canon status, since the new continuity has been porting in concepts and backstory pretty freely with Broad Strokes in mind. In the words of Ahsoka Tano... "There is always a bit of truth in legends."

Other
"Infinities"
"Infinities" is a term referring to Star Wars Legends stories that were officially considered non-canonical even before all of Legends was declared non-canon. These stories were often "What If?" stories, parodies or Intercontinuity Crossover/Fusion Fic tales.

Over the years, what counts as canon for Star Wars has been made extremely difficult due to the size of the expanded universe (made no better by George Lucas making a special edition every year or so). However, a very loose system as to what makes up the overall canon was created by Leland Chee, a Star Wars expert hired by George to keep track of everything Star Wars. Before the events of April 2014, the levels of continuity were:

Example of:
Multi-Armed and Dangerous