Literature / The Truce at Bakura 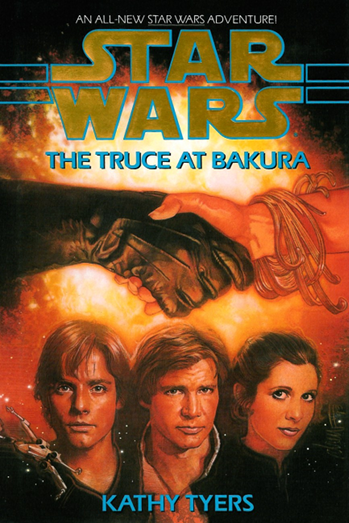 Yesterday, the second Death Star was destroyed, and Emperor Palpatine and Darth Vader slain... But today is business as usual, and the Rebels have business helping the Empire. A far-flung Imperial system, Bakura, is under attack by previously-unknown saurian aliens called the Ssi-ruuk. With the Empire in disarray following the losses at Endor, only the Rebellion can render aid in a timely manner. Whilst dealing with the aliens, themselves no picnic, Leia struggles to form diplomatic ties with the Imperials, with (or despite) Han's help, while Luke meets a fellow Force-sensitive and starts falling for a girl who considers Force-users abominations.
Advertisement:

Written by Kathy Tyers and published in January 1994, The Truce at Bakura holds the distinction of being the tenth Legends novel published by Bantam

, released months after The Thrawn Trilogy and The Glove of Darth Vader. It's also set immediately after Return of the Jedi, beginning literally the day after the movie's events, and for that reason is often cited (along with the Thrawn Trilogy) as being one of the best starting points for readers who want to get into the Star Wars Legends universe.