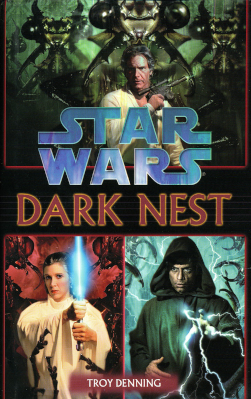 "Bugs! Why did it have to be bugs?"
— Han Solo
Advertisement:

The Killik, an insectoid race capable of absorbing non-Killik species into their Hive Mind via brainwashing. They launch an invasion on Chiss territory, prompting the Chiss Ascendency to retaliate with aid from the Galactic Alliance. When the Jedi get involved, a number of them are brainwashed by the Killik into becoming Joiners. Luke and Mara's son, Ben Skywalker, also begins growing up and developing as a character in this series.

Written by Troy Denning, this trilogy is noticeably bloodier than most Star Wars Legends books.