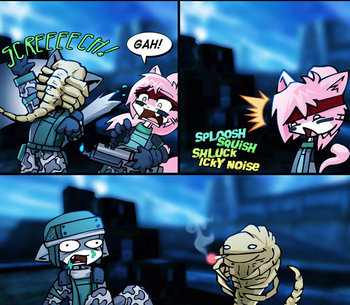 Well, at least one of them is enjoying the afterglow.
Leo: It's about those alien face-huggers. They clamp to your face and implant their babies into your stomach, right? [...] Wouldn't that mean they stick their, you know, down your throat?
Aeris: OH MY GOD! They're raping your face! That's horrible!
Leo: I tell ya. As if killing you isn't bad enough. You also get a face full of alien wing-wong.
— VG Cats #114, "That's Saying a Mouthful,"

A creature reproduces by impregnating another species. This can be a very literal pregnancy, a rearrangement of your DNA, or it could be the implantation of a parasitic egg or larva into the body of a host of either gender, which may very well lead to a
Advertisement:
Chest Burster situation.

Please note: Despite the name given to the trope and the unpleasant image its name implies, the impregnation doesn't have to occur via the face of the victim, nor does it have to be non-consensual. The above can result in an Express Delivery. A similar weaponized version of this would be Spawn Broodling which also involves the previous trope.