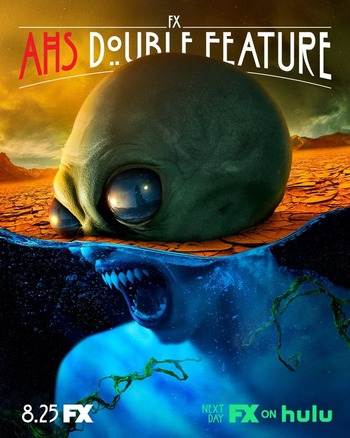 In a first for the franchise, Double Feature is actually two seasons in one: Red Tide and Death Valley. Each will also have their own distinct stories and casts of actors, with an emphasis on fan-favorite returning cast members to commemorate the series' tenth anniversary.

Part one, Red Tide, follows the Gardner family, who have recently moved to the peaceful Provincetown, MA so that patriarch Harry (Finn Wittrock) can focus on his writing by the suggestion of his wife, Doris (Lily Rabe). After Harry encounters a mysterious group of locals who promise him success and a cure for his Writer's Block, the town is rocked by a series of grisly murders, which his new friends may or may not have a hand in doing. Also appearing in Red Tide are Sarah Paulson, Evan Peters, Frances Conroy, Leslie Grossman, Billie Lourd, Angelica Ross, Ryan Kierra Armstrong, Denis O'Hare, Adina Porter and Macaulay Culkin.