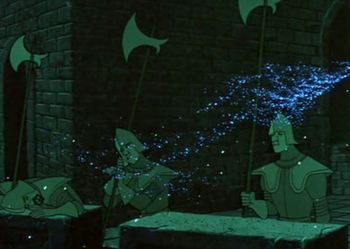 You are getting sleepy. Very sleepy...
Advertisement:

This is a kind of spell or power that induces sleep in the target. Typically, it's not the character's only ability; it may be one application of Functional Magic, Charm Person, Compelling Voice, or Magic Music.

In video games, this will take the form of a Status Effect.

Instant Sedation is the technological equivalent. Compare The Paralyzer.

The Three Good Fairies put the whole castle to sleep until Aurora awakens.

The Three Good Fairies put the whole castle to sleep until Aurora awakens.