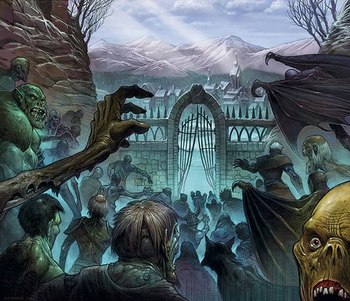 Do not despair in front of this army of the undead. Remember: These are victims, not victors.
"From every graveyard pour the hordes to strike before the dawn
A thousand years of death's carnage gathered 'fore the morn,
Their vengeance turned against mankind's unsuspecting head
There's no defense, there's no escape, you cannot kill the dead!"
— Pagan Altar, "The March of the Dead"
Advertisement:

Dead folks who, whether due to dark magic, mad science, lack of a proper funeral or burial, some old problems they still haven't solved, a desire to get revenge on their killers or enemies, or just plain stubborn bloody-mindedness, do not rest in peace. Unable to move on to the afterlife, they still roam around in the mortal world, (poorly) trying to behave as if they're still alive.

One way undead vary is the nature of their mind, soul, and spirit. In some cases, including liches, most ghosts, and some vampires, they keep their original soul and personality. They can still remember the simple pleasures of life, but they can no longer experience them, a frustration which may fill them with hatred of the living, or simply make their existence an unliving hell. Friendly/heroic/sympathetic undead are most often from this category.

In other cases, including many traditional vampires and most zombies, the undead are actually animated by evil spirits or demonic entities. They may have access to the memory of the deceased person whose corpse they are wearing, but they are not truly the original person in question. These types are almost invariably evil, and are much more likely to be vulnerable to religious symbols and sacred rituals.

The remaining forms of undead may be little more than puppets of a Necromancer, or they may be powered by magic alone, but they have no animating spirit (at least, not a sentient one).

See the Undead Index to read more about all the related tropes; along with the Haunted Index, Mummy Tropes, Skeletal Tropes, Tropes of the Living Dead, and Vampire Tropes.

Beings of the Undead: