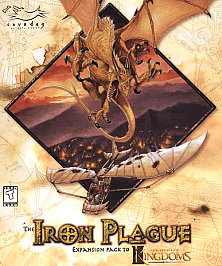 cover of the expansion
Advertisement:

Commonly abbreviated as TA:K or TAK, this Real-Time Strategy is the follow-up of the successful Total Annihilation made by the now-defunct company Cavedog Entertainment. The latter's setting, centered around mechs and vehicles and never showing humans, had been chosen partly because it had been thought that the much-admired 3D engine was not capable enough to depict them. Later, however, improvements made TA:K possible.

TA:K has number of differences separate from its predecessor. Firstly, it is set in a magical-fantasy world called Darien rather than a Grimdark science fiction future; secondly it has four sides rather than just two(The expansion adding a fifth one); thirdly said sides' units were very divergent, rather than almost every Arm and Core unit having a direct other-side analogue as in Total Annihilation. TAK also introduced mana batteries and multiple selectable attacks.

TA:K was not as successful as Total Annihilation, and parent company Cavedog shut down due to bankruptcy shortly after the release of its Expansion Pack, The Iron Plague. However, the game enjoys a strong fan community and its versatile engine led to many mods and new side additions - probably the best-known fan-created side is the Azurians.

The Plot: All-powerful magician Garacaius conquers a fair portion of land and gains immortality. Of which he soon grows bored of (relatively speaking), and gives all of said lands and power to his children to rule over with artifacts and 'lodestones' that harvest mana and disappears. Needless to say, the siblings soon end up fighting over both. Drama Ensues when the Steampunk Creonites enter the fray and take the quest of wiping out all magic. Who turn out to be trainees of Garacaius who learned and taught science in his exile. Oops.

, which unfortunately ended up in development hell and was cancelled.

open/close all folders
Monarchs
Changes from Total Annihilation
One reason for TAK's failure is that it did not continue some of the trope-aversions its predecessor had been praised for. These include: