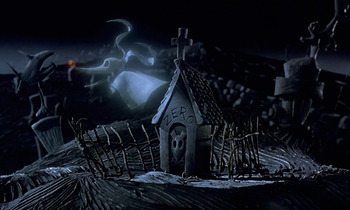 He's there for you even in death. Now THAT'S Undying Loyalty.
''Listen young friends, for what I say is true
You must treat your pet hamster as you would have him treat you
Or fear that one day you'll hear a ghostly voice exclaim
"wooo... someone forgot to clean my cage..."
Ghost Ghost Ghost Ghost Ghost Ghost Hamster''
— Parry Gripp
Advertisement:

Just because it's predominantly humans who appear as ghosts in fiction does not necessarily mean that animals can not appear as ghosts, too. Ghost animals are ghosts that appear, manifest, or materialize as animals. However, this can also occur when an animal is stated to have died and become a ghost.

These specters usually appear as sidekicks to other ghosts in Ghost Fiction, although they can appear on their own as well. They may be used for world-building purposes or, in fiction which depict ghosts as malevolent entities, to provide an extra threat to the heroes. After all, a vicious-looking animalistic spirit can be more ferocious than a normal human. Often, they may also show up as a pet animal (often a cat or a dog), either seeking revenge or otherwise acting as a companion. To make it clear, for this trope to apply, the creature in question must be no higher than Talking Animal on the Sliding Scale of Anthropomorphism. May occur as a result of an Astral Projection.

See Raising the Steaks for the zombified variant. More malicious examples of this may fall in Animalistic Abomination. A sub-trope to Our Ghosts Are Different. For other forms of undead non-human life forms, see Non-Human Undead and Dracolich. For a more mythical take on the concept, see Asian Fox-Spirit and Bakeneko and Nekomata.