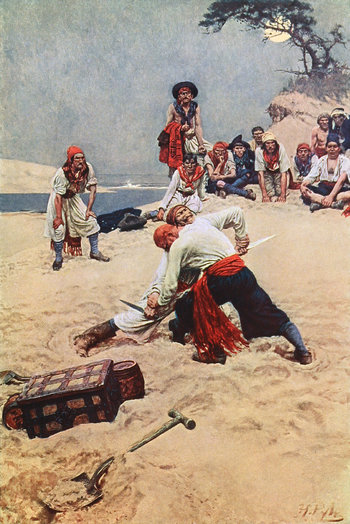 Who Shall Be Captain? by Howard Pyle
Advertisement:

(No, we're not talking about the days before the passage of the DMC Act).

Gather round me hearties, and hear a tale of the days of Wooden Ships and Iron Men, derring-do, and fortunes to be made upon the Spanish Main!

The Golden Age of Piracy was a period of European history spanning roughly seventy years, between 1650 and 1720. Historians differ on exact dates, but this is a pretty good estimate of the time frame. This was by no means the first or the last outbreak of lawlessness upon the sea; wherever there are things of value going somewhere, there are thieves looking to steal it before it gets there, and there have been pirates almost as long as human beings have been transporting things over water. But the Golden Age is by far the most romanticized time in the history of piracy. When we think of swashbuckling adventure upon the high seas, we’re thinking of this time period. It was a time of colorful characters and high adventure. It was the time of Blackbeard, of Anne Bonny, and of Captain Kidd… and many, many others.

By the middle of the 17th Century, the religious conflicts that were touched off by the Protestant Reformation (particularly the Thirty Years' War) had died down, leaving European powers free to once again start developing their colonial empires in the New World. With this development came a new influx of goods and precious metals, and the establishment of a network of trade routes across the Atlantic Ocean. And where there were highways, there were highwaymen. These thieves were largely based in the Caribbean Sea, due to its convenience to the Spanish Main, and its abundance of islands and shoals, giving them plenty of hiding places from which to strike. Although initially just a nuisance to the bustling trans-Atlantic trade, as the Golden Age went on pirates became genuine threats, often bringing nations to the brink of war with their zany antics along maritime borders.

The Golden Age saw many major political developments that would shape world history to come: it saw the decline of Spain as a superpower, and the subsequent rise of England and France. It saw the beginnings of large-scale global commercial trade, and the birth of the first Mega-Corp, the British East India Company. And, most significantly, it saw the dawn of the concept of a professional navy, as European nations grew wealthier and more powerful, and colonial empires became larger and separated by greater distances, necessitating a permanent defense force to keep the colonies safe and the profits rolling in.

It all began with the Buccaneers, French squatters on Hispaniola. For most of the first half of the 17th Century, Spain was preoccupied with war in Europe, which meant many of their Caribbean territories were allowed to go fallow. Hispaniola chief among them: taking advantage of the lack of any real regional authority (and the ready supply of feral pigs rampaging around the island), the Buccaneers made a good life for themselves as poachers and brigands. In the 1630's, with things in Europe having quieted down, the Spanish began to reassert their control over Hispaniola, driving the Buccaneers off the main island and onto the neighboring islet of Tortuga. Cut off from their previous lifestyle (and the feral pigs), the Buccaneers re-invented themselves as sea-borne pirates, launching raids on coastal settlements and treasure galleons.

With the Spanish still trying to get their act back together in the Caribbean, the coastal towns and treasure-laden ships bound for Europe turned out to be easy prey, and the region experienced a boom in piracy. It wasn't long before the English - who already had a long and glorious tradition of harassing the Spanish at sea - got into the act as well. English privateers descended on the Spanish Main, even going so far as to wrest control of Jamaica from Spain in 1655. The Jamaican city of Port Royal soon became the unofficial base of operations for Caribbean piracy, a place to unload booty, get some booty, and plan the next raid.

By 1680, the piracy boom had boomed itself out. The Buccaneers had basically become victims of their own success: their raids on Spanish settlements had become so frequent and so devastating that eventually the Spanish just stopped trying to rebuild them. Treasure shipments from Mexico to Spain became more infrequent as the infrastructure that supported them fell into disrepair and gold and silver veins ran dry. Meanwhile in Europe, King James II of England was deposed by his daughter and her husband. The loss of a Catholic-friendly monarch meant that the ancient English-French rivalry was back on, which subsequently ended the friendly collaboration between English and French pirates that had made the Buccaneering period so profitable for all of them. The last straw was the near-total destruction of Port Royal by an earthquake in 1692. Without a local base of operations in the Caribbean, and no real reason to stay, pirates began to branch out.

Beginning in the 1690's, the bulk of piracy took place along the "Pirate Round," an oceanic trade route that circumnavigated Africa and followed the Asian coast to India. The bustling trade between the Mughal Empire and the British East India Company was the main target, with gold, spices, and the occasional wealthy Muslim pilgrim on Hajj getting taken as prizes. It was during this period that some of the biggest names in piracy emerged, as they launched spectacular raids and made their fortunes.

The Golden Age was effectively put on pause with the outbreak of war in Europe. The War of the Spanish Succession meant that European nations - England in particular - found themselves in need of privateers and honest sailors to contribute to the war effort, and many pirates answered the call. So many did so, in fact, that the Caribbean was effectively emptied during the War. A fact that would come back to bite the English later...

The War precipitated a great geo-political shift in Europe and the Americas. Spain's supremacy in global affairs was broken, and the newly-formed union of England and Scotland known as Great Britain emerged as the clear winner in the post-war landscape. With a bustling commercial empire now on its hands, Britain began making sweeping changes to how it conducted itself overseas. Most notably in its military: rather than the traditional ragtag band of privateers, Britain instead invested in building a full-time, professional navy. It's a Foregone Conclusion that this worked out quite well for Britain in the long run. But it was not great news for those privateers, who, after the War's conclusion, suddenly found themselves unemployed and prospect-less. They soon made their way back down to the Caribbean, and to the Bahamas. Much like the Buccaneers before them, they found a colony largely abandoned by its ruling empire, and they quickly moved in, claiming the island of New Providence for themselves as a "Pirate Republic."

Unfortunately for them, this wasn't the England of 1650 they were dealing with now. This was the Great Britain of 1715, and Great Britain had very little tolerance for their shenanigans. Privateers might once have been a Necessary Evil before England had an empire and a standing navy, but now they were a nuisance and a hinderance to respectable overseas commerce. The crackdown was hard, culminating with the appointment of the privateer Woodes Rogers as Royal Governor of the Bahamas in 1718, and his dismantling of the "Pirate Republic" by both diplomacy and force (whichever was called for in each individual situation). By the mid-1720s, the Golden Age had fizzled out.

The Age itself, as well as the pirates that lived in it, are popular subjects of romanticization. To the popular imagination, a pirate is the epitome of the Rebel, the flamboyant, freedom-loving adventurer who travels to exotic climes, owes allegiance to no one, harasses The Man at every turn, gets rich doing it, and gets to come home every night to a pristine tropical beach where he can drink rum and make time with the ladies to his little black heart’s content. The reality, of course, was rather different.

Pirates of the Golden Age were, at heart, robbers and thieves. And since piracy was (and still is, in some places) a capital crime, they were often desperate men with nothing to lose. They wanted your cargo, and if they had to kill you to get it, well, too bad for you: they're already going to hang for piracy; a murder or two won't make a difference. And if you were lucky, they wouldn’t do unspeakable things to you and your crew first. Some did adhere to a loose code of honor where they’d negotiate terms of surrender, or would leave crews largely unharmed if they didn’t resist, but this was by no means a hard and fast rule. Of course, if you did resist, you were in for very rough treatment.

That being said, a surprising amount of the pirate tropes we have come to accept were Truth in Television, and were established during this time period. Pirate ships were, on the whole, nicer places to live than legitimate merchant ships (“nicer” being a relative term on 18th-century sailing vessels). Pirate crews were more egalitarian: crews elected their captains, and could vote him out of office if they wanted. They could vote on targets or destinations. And they often got an equal share of the plunder. Some historians have actually made the argument that pirate ships should be considered the first functioning Western-style democracies in the Americas. Pirate captains did draw up their own codes of behavior, to keep discipline at sea. And yes, they did love their rum. As desperate men, pirates lived fast and hard, spending money on women and booze almost as fast as they made it. That’s why we don’t find a lot of actual Buried Treasure: why save your money when you could be hanging from a dock tomorrow?

Expect Golden-Age pirates to be the Rock Stars of their day: dashing, flamboyant, attractive in a dangerous kind of way. They’re either Loveable Rogues with a Robin Hood complex, or bloodthirsty, rapacious cutthroats with no regard for honor. The lasses are lusty, and often busty. The authorities are zero-tolerance types who wear powdered wigs (when they play a part in the story at all). And pirate treasure is always silver and gold; never mind all those practical things like citrus fruit and fresh water…

Drink up me hearties, Yo-Ho.

Compare The Wild West, a period that also had its fair share of dashing outlaws and wide open space for settlement and plunder.

Tropes related to the Golden Age of Piracy include:

Fiction set in the Golden Age of Piracy include: