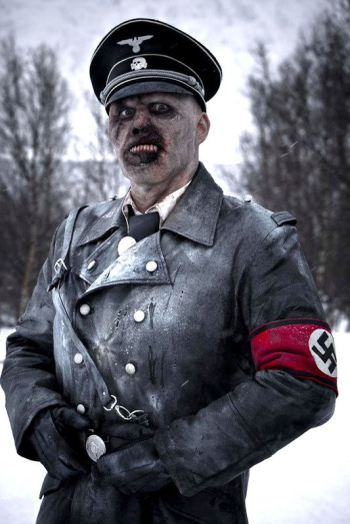 Nazi zombies don't wanna eat ya just 'cause they're craving the protein! They do it 'cause...they do it 'cause they hate Americans, man! Talibans, they're the Talibans of the zombie world!
— Brandon "Badger" Mayhew, Breaking Bad
Advertisement:

A particular Sub-Trope of Ninja Pirate Zombie Robot that has seen a rise in popularity from the late 2000s onwards. Nazis are a Villain by Default, so one way to make them even more evil and scary is to have The Undead bear the swastika. If it's just for the sake of Rule of Cool, this trope overlaps with both Everything's Deader with Zombies and Gratuitous Nazis.

So why are World War II-era Germans so often depicted as shambling corpses? Well, this fantastical association between Nazis and zombies presumably flows forth from the Nazis' rather comprehensive Kill 'Em All policies in regards to racial and ideological enemies. There is also the Obviously Evil use of skull imagery on uniforms, and a history of occult societies in Germany that were supported by some members of the Nazi Party. If there's any faction in World War II who are believable as undead monsters in fiction, it's the Nazis.

Like other zombies, how intelligent they are varies from depiction to depiction. If intelligence is on display, there's usually just one or two commanding officer types leading a rabble of more mindless soldier type zombies. Sometimes, though, they're all just a mindless horde who are less "Nazi zombies" than they are "zombies in Nazi uniforms," due to being incapable of having a creed more complicated than "go here, eat that." If the latter type, they may not have any loyalty to other, living Nazis, and will eat them as willingly as they'll eat any other living people. If they are intelligent and still loyal to the former Nazi regime, they also serve as The Remnant and may well attempt to establish the Fourth Reich—with zombies!

A rather literal form of Ghostapo. Could be the reason why there's a Weird Historical War going on.